Skip to content
Reverie has representation, yes. But it also brings a sense of fantasy, magic and fun to a blinder of a mystery.

Brutally honest? Reviewing Reverie, Ryan La Sala’s debut novel, has been one of the most difficult reviews I have ever written. There are three fundamental reasons why and the only way to get through this review, is to break them down. Although that should be obvious from the fact that it took me until 5:00 PM on the date of publication to post it.

I think it is essential that I start with the most important part, first. Reverie is, without a doubt, an essential release in the publishing landscape. There must be more stories with not just protagonists representing the LGBTQ community, but an entire cast of characters where straight is the minority.

If an an elderly f/f relationship melts even my black soul and shattered heart into a puddle of goo? During this time of the year, no less? Well. That is a unicorn (no pun intended), indeed.

Beyond that there is nothing I can say, nothing I should say in regards to what connections can or might be made between the hearts, minds and souls of those that are yearning for these stories in the world. It isn’t that I have never commented on marginalized stories. I have and when I can, on one level or another, I will. This is not one of those times. These are not characters who are x, y, z and then there is a sexual orientation, as a point of reference to cover the representational checkmark. It just is. And it is everywhere.

And that is why this is such a hard review to write. Not because it is a bad book or a fantastic book but because it is a book for an audience that I am not apart of. It is a book that everyone should read and I thoroughly enjoyed but, maybe I just don’t need to review.

Because the identity of these characters aren’t a struggle or a problem but it is them and maybe there are things that I didn’t understand but of course not. How could I? If I’ve never had their experiences then how could I do anything but try and learn from what I had read. And I learned a lot. 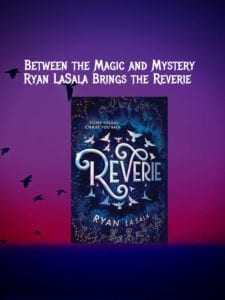 Who hasn’t wanted to run away at some point and time? Running from reality always has its consequences. Even if you have a valid reason. Even if you are pulled from a river without a memory and everyone says you did something that you have no recollection of doing. Sooner or later reality must be faced. You will have to turn around and face it, especially if it is a false reality. Because if you don’t? It will get even worse.

The characters are wonderfully relatable. Kane is instantly loveable and you will root for him the entire story. Both the fantasy world and earthbound one that Kane is forced to wrestle with are built in entertaining, and brilliant detail (especially the fantasy world- filled with magic and colorful spectacle).

Because Kane was easy, the mystery was all the more enthralling. I was hooked from go.  The more Kane raced to find each clue that began unraveling the mystery? I was racing right there with him until everything came together at the end. The mystery had to be solved almost as much because I needed to know as badly as he did!

I believe that Reverie isn’t just an essential book but a wonderful one. And I hope that those that like me, might not understand parts- or maybe, the better term is that they might want more thought out- that they might think on it for a few days, as I did. During that time, they might come to realize, after rereading a passage or ten that it isn’t more depth or explanation within the book that they are seeking.

Instead, Reverie is opening up their blind spots and giving them a chance to seek out places where they can go learn.

11 thoughts on “Between The Mystery And The Magic Ryan La Sala Brings The Reverie, Out December 3, 2019”