It is no secret that Sara Faring’s debut, The Tenth Girl hit me like a bullet train last year. As soon as the ARCs for White Fox became available to review, I prayed to the book fairies and they answered. I was honored to read White Fox early, and to interview Sara Faring a second time. I will post that interview in the coming days. And then I think those book fairies must have waved a wand, sprinkled some fairy dust onto the pages of White Fox, and whispered words in my ear. In no time, I was under Sara Faring’s spell, familiar from last year.

The Tenth Girl and White Fox share a trait of being bigger than the story they contain. Faring’s writing is a living, breathing entity, totally separate from the story. I would liken this additional emotional gravitas (not the stories themselves) to A Room Without Wolves by Nova Ren. However, familiarity does not equate to similar stories. White Fox, on the whole, is a story distinct and opposite of The Tenth Girl.

Where The Tenth Girl’s slowly creeping urgency created an icy depth in your soul, a fight or flight need to run and avoid the rapid deterioration of all that is in front of you, from death, the past, coldness, and dark; White Fox breathes into life. Faring’s arc over White Fox centers in strength, facing emotions, life, and feeling the earth. Leaning into the entirety of your five senses and letting in everything. Braving both the horrific and divine as it swirls around you. Faring’s dreamscape in White Fox places you directly in the eye of a storm that breaks your heart, breathes life into shadows and lets your soul soar.

White Fox centers on two sisters that are opposites and yet reflections- opposites of each other and reflections of their mother’s different sides. Tai is the vivacious, wild child, the beauty, and burgeoning model/ actress. The world sees their mom in Tai and is always trying to get a piece of Tai, a piece to hold on to their famous, mysterious mom.   Noni is the quiet, introvert that doesn’t keep much company and stays out of the spotlight. Noni doesn’t think much about their mom or what might have happened to her, long ago.

Faring gives you two points of view not through just their unique voice but through their actions, their emotional states, and how they process their family trauma, let alone the past coming back to haunt them. When their father dies and leaves them a vague letter about their mother’s mysterious death (was it suicide as previously thought? Murder? Kidnapping? Disappearance?), it becomes more and more clear just how different these sisters are not just in personality, but how they view the past. 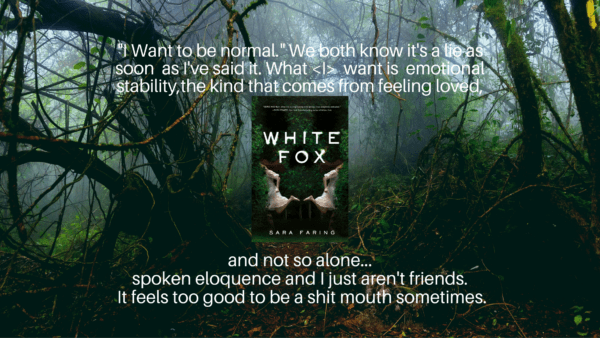 Thank you to Imprint for an ARC in exchange for an honest review.

Noni sees a much more realistic look upon their childhood. She recognizes the unhappy times and what has happened since her mother disappeared. Tai cannot exist in any reality where they didn’t have an idyllic home. While Tai can accept that she had two busy, absorbed parents. She can’t accept that she and Noni weren’t their everything and always provided for, even at the busiest of times. It is so engrained in Tai’s identity that to burst the bubble, would be to break Tai. Noni, on the other hand, accepted long ago that their mother left them, committed suicide, that their lives were never idyllic or what Tai remembers them to be.

Throughout White Fox, Noni consistently demonstrates traits of anxiety and OCD that are well-thought-out and interspersed in the story. She repeats words and phrases. She picks at things and describes her acute panic as fizzy pennies- binding it all together and drawing in all your senses.

I’m picking at my hangnail- a bad habit, like the lip biting. But it reminds me I’m in control. Besides writing, it’s the little things like this that keep the fizzy pennies of anxiety at bay.

Every story has three sides. Yours, mine, and the truth. To figure out that truth, they will go home to Limatra.

After ten years- ten long years spent wandering the purgatory of uncertain loss- it will take only one week to solve our mystery. One week of madness, brilliance, deception, trust, weakness, strength, abandonment, love, and sacrifice in the belly of our birth town, Limatra, and the fringing forest of delirium to its west…

But just as every story comes to an end, it must also start at the beginning…”

I’m doing good and I need to say so much and can say so little. I have and will keep everything to the bigger themes, emotional forces and Sara Faring’s genius, which there is plenty. When Faring is throwing books like The Tenth Girl and White Fox into the world, it is a huge help because… AYE SPOILERS.

White Fox is the screenplay portion of the novel. It is full-bodied ambiance with an ethereal quality that strikes a harsh chord against the realities that Tai and Noni are navigating. Considering it is White Fox that holds the clues to their mother’s mental state, her last work before she disappeared. It is a referendum on who their mother was, their last glimpse on how she viewed her life, the people in it, and just possibly an explanation for her death, or clues to her whereabouts if she disappeared.

How it reads and what it contains isn’t anything I can or even would try to explain, spoilers or not. Astoundingly, Faring uses this second format and gently pulls at strings I am still unraveling in my mind. Everyone lives life and has people that come and go during that time. How do they view your part in their life? Is it the same as how you view it? Would you write your part in their life, the same as they would write your part?

If you wrote your life’s screenplay, who would be the villains, the angels, the shady and messy people? Do they know who they are, now? Have you told them honestly, what they mean and who they are in your life? Would they recognize themselves in your screenplay, if they had a different name? Would you recognize yourself, in someone else’s?

Self-worth and our ability to find it within ourselves, robbing ourselves of every inch of attention, abandoning the world to see if we still felt our own sense of self. Without men, without the world telling us who and what we are, what we are worth, could women do it on their own? If no one missed her, would she no longer feel anything good, at all?

Did feeling good as new have only to do with being in the possession of a man? Or was it my isolation from society- my ignorance of its inconvenient truths? I had to test this.

Can someone’s light be enough to help you find your way out of the dark? Facing the dark is a scary place to be, especially when it includes facing the buried secrets, hidden fears and the darkest parts inside of ourselves let alone that which surrounds us.

When you are chasing for answers that are in places that are named Delirium Forest you have to be steady in where you stand. You don’t know what you will find, or scarier, what you might catch. It might not be what you were looking for, and even if it was? What you were looking for might not be a happy ending. They are constantly in motion and not always fighting. More often than not, they work together, creating all the various greys that muddle us up. Everyone does the best they can with what they have at any given time.

In order not to spoil (actually harder than it was with The Tenth Girl last year), I’m going to paraphrase one of my favorite lines from the book- Light and dark are almost the same ethos- to be safe in the light, you have to respect the dark.

Confessions of a YA Reader