Multiple things can be true at the same time. I would like to think that 2020 Bingo has taught us this, among a host of other things. Before I dive into my buddy read of Fable by Adrienne Young, let’s get some context. First, here is Becky’s review of Fable. You will notice that we downright mirror each other on some of the points I’m going to make. I’m just a bit more on the no side. When Maddie writes her reviews, I will link it, here. Truthfully, throughout our discussion, this was pretty much the case, all around. For me, Adrienne Young’s Fable being on the young side of Young Adult didn’t fix enough to pull Fable along.

Here are some bookish examples of multiple things that can be true at the same time:

We got the idea of how this works? Good. Side note. Just because I mention The Guest List doesn’t mean I’m about to destroy Fable. Just breathe. It isn’t up there with The Guest List.

At the same time, these two things can absolutely be true.

Also! At the same time, these two things can absolutely be true.

Example of books that were on the younger side of YA but was still an entertaining read (for me, obviously I’m just speaking for myself): Spin the Dawn, King’s Questioner

I don’t want anyone chasing me up the “this isn’t an adult or even older Young Adult Spectrum Young Adult Book.” I get it. I understand and pointed it out in our buddy chat. That was pretty obvious upfront. Adrienne Young writes Fable and the story, exactly in the tone and voice intended. I’m not criticizing any of those points. Once I figured out that this was leaning young, I didn’t expect the same level of complexity, the maturity of voice, or critical decision making that I would expect in an older Young Adult book. 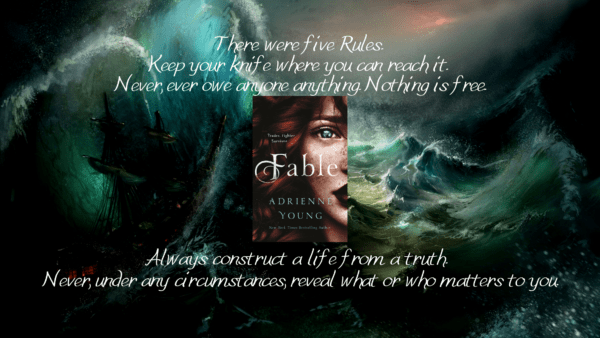 Thank you to Wednesday Books for an ARC in exchange for an honest review.

At one point, Becky said that it was a palate cleanser, a lighter, quick read. And I completely understand where she is coming from. I understand this because I said the same thing in my review of King’s Questioner by Nikki Katz. I couldn’t understand why so many readers were so deeply disappointed. However, it dawned on me that I had just come down from a string of really heavy reads. It was, I think, a matter of timing for me. We all need to have books like this to reach for, because if we just go epic, dark fantasy all the time, I mean even I need a quick read every once in a while. SHUT-UP.

Now, it is just down to preference. Or, if you like both, you have more than one to choose from on your TBR. So, again, before I move on, on all of the above, I am not arguing any of these points. What I will argue below is that being on the young side of YA does not excuse Fable from some very serious missteps. Here we go…

Quick Note On These Rules

Fable’s father. Wait. Let me back this up. Fable’s father, who strands her on an island when she was like, 12, gives her five rules to live by. Here’s the thing. I don’t care what these rules are. They could be:

Whatever. My point is this: YOUR FATHER STRANDED YOU ON A DAMN ISLAND. WHY IN THE NAME OF ALL THE PIRATE BOOKS ARE YOU FOLLOWING HIS DAMN RULES? WHO CARES? And this does not go back to her age. Anyone who has had a shitty childhood and father can figure these things out by the time they are 16. Actually, long before it. Plus. Pirates. What pirates even follow rules? I think this is like, pirate canon. 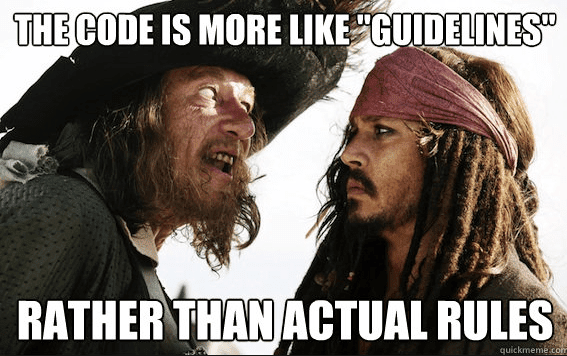 Wasn’t me. Not this time. I have Maddie and Becky to back me up on this one. This was whiplash. Not only was it whiplash, but it was just badly written. The only good part about any of this “romance” was that it forced all the rule-breaking. And I was all about Fable breaking these idiotic rules given to her by a father that just dumped her on an island.

Yet, he never thinks to, I don’t know, JUST TAKE HER WITH THEM?! He’s the captain of the damn ship. What the hell is that? Could there be reasons? Sure.  Do I think it plays out in a way that makes any kind of sense? No. The plot holes in the way that plays out are like swiss cheese. More on West in a second.

Yet. She falls for him. Even after he tells her all this. And WAIT. One paragraph it is… an all serious… like not angst or even we are fighting back the scene when we are just about to tear each other’s clothes off. Nope. None of that. Just a straight-up serious conversation, where he ends up shutting down and she is confused. Next thing you know, West and Fable are underwater sucking face. And I’m like, when did I go from Adrienne Young’s Fable to… some Young Adult version of The Shape of Water (which no I’ve never seen, nor do I want to)...  Just felt like in one paragraph they were all no-go and literally in the next paragraph, they were underwater… 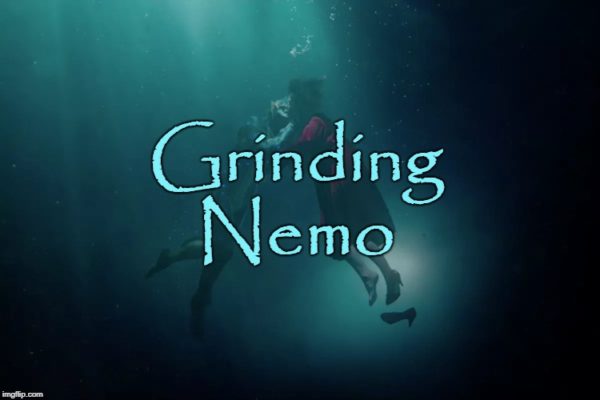 All triggers aside, this is not how the trope works. Even I know that, and I ignore it most of the time.

Am I going to read Adrienne Young’s Sequel, Namesake? Yes. I kind of have to because I already have it. Here are somethings I really hope get fixed, since I’m reading it, anyway.

2 thoughts on “In This Episode Of Buddy Reads, Validation That It Isn’t Always My Trigger Singling Out Bad Romances- Fable By Adrienne Young”