Skip to content
MarcyKate Connolly returns with Twin Daggers. This younger YA novel features enemies to lovers, magic vs. machine, politics, and deception. Also, a note about Blink YA and its role in publishing.

Blink YA And Publishing

Before I discuss Twin Daggers by MarcyKate Connolly, I want to note something important about Blink YA and its importance within the Publishing world. As both a bookseller and a veteran in the education field, I have noticed a value-add they provide. Parents and those at an age not quite ready for the content often categorized as Young Adult, but have grown out of the “juvenile section” feel lost.

Blink YA provides not just one book, but a safe harbor of books. I can point to the Blink YA logo as something to look for when trying to find a set of core values. Values/guidelines include but are not limited to:

At the same time, do not let this fool you. Blink YA still provides a multitude of books that have representation (Wardens of Eternity Review and Q and A With Courtney Mouton), and deal with current events (Every Stolen Breath).

Twin Daggers (which falls on the younger spectrum of YA) by MarcyKate Conolly continues to follow the above traditions. Then, Mary Connolly includes themes around war and oppression. Lastly, how those born with medical needs can be left to fall through the cracks.

This is one of those rare times I am not Captain America. I do adore Shakespeare. While Romeo and Juliette is not my favorite Shakespeare play, I do know it well. So it is fair to say that yes-

Twin Daggers doesn’t have enough for the retelling category. This isn’t a knock against Twin Daggers or MarcyKate Connolly. I think it is a matter of proper marketing. Retellings are a huge trend right now, but mismarketing books into that trend can cause more harm. If I pick up a glass expecting wine and end up drinking water. It isn’t that I don’t like water, I was expecting wine.

Instead, this is a enemies to lovers trope, not Romeo and Juliette. If readers go in knowing that, then they are more likely to enjoy it for what it is, instead of being disappointed for what it isn’t. It isn’t the first time trends have run amok with comparisons, and it won’t be the last.

There was, and still is, Six of Crows comparisons (and I love Six of Crows). So many brilliant books that I loved were set-up for failure because they were compared to it and were nothing like it. It is a marketing ploy that I hope becomes a fixture of the past.

All this to say:

1. Do not go into Twin Daggers expecting Romeo and Juliette.

2. Do go into it knowing it is the younger side of YA.

If you do those two things, you will enjoy Connolly’s latest book in a series of well-received titles.

I am a sucker for sister power. Zandria and Aissa are twins that are magically gifted spies trying to help the Magi regain their place after the Technocrats took over and eradicated them after a long war. The Technocrats believe magic to be evil, and the Magi believe anything having to do with machines is an abomination.

Zandria is the flirty, loose and carefree of the two, while Aissa is more focused and grounded. Together they are known as the Twin Daggers, and they are a formidable team, especially for their age. Their parents were well-known spies within the ranks of the Magi spies.

Remy is the son and heir to the Magi leader. He is also their childhood friend. Aro is a Technocrat researcher, and that is all I can say about him. There is also a large assortment of supporting cast. While the girls attend a Technocrat school during the day to gather information, there are many school mates. Some the girls grow to care for, even if they are faking their enthusiasm for their classes.

Sometimes I wish our friendship with them could be real. We’ve shared so much- class, laughter, and the trials of staying awake through lectures. Everything I do must be a deception, but despite my best efforts, I’ve grown fond of them. So has my sister. It’s a sad thing to admit you care for people who despise everything you are.

This quote represents the depth and layers that Connolly brings to all characters in Twin Daggers, both primary and supporting. As characters become intertwined and begin crossing paths, it adds tension and emotional anguish that increases throughout the story. It was also easy to invest from the beginning.

There were different landscapes within the city of Palinor. All of them are built out distinctly. It is easy to not just picture but feel and sometimes smell (even if I would really rather not) the different areas.

The tunnels beneath Palinor that the twins often had to sneak through when spying was grimy, dark, and filled with rats. The smell, dirt, and overall city waste of them felt like they were on my clothes and in my hair. It often felt claustrophobic, like the walls were closing in around me. There was an urgency that clashed with the darkness and unknown that held my attention. 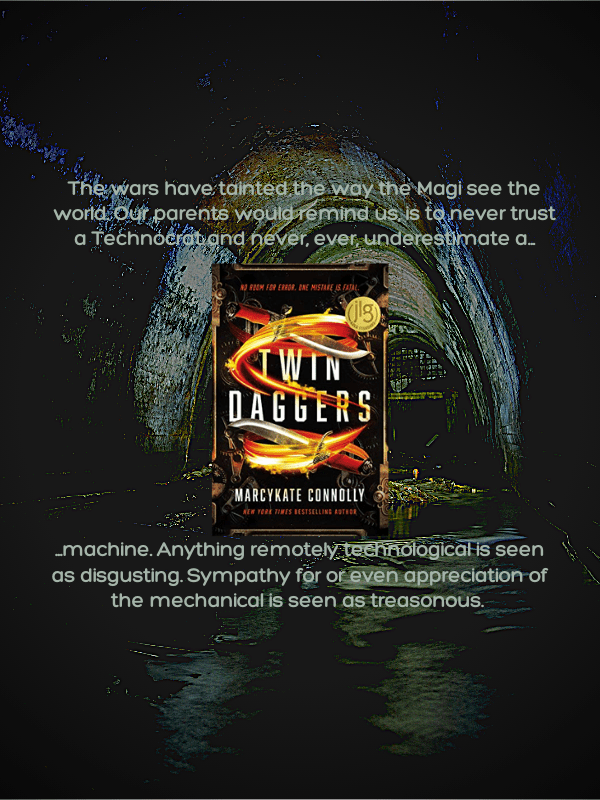 The castle was every opposite of the tunnels in look and smell. However, when necessary, that feeling of danger and claustrophobia came through in very different ways. MarcyKate Connolly used unyielding threats of deceptions (known and unknown by various characters) being played out to keep up the constant feeling of being watched and looming danger.

There are things I can and can’t say about the magic system. While some of it isn’t original. It has been done before; again, this is a younger YA novel. That should be kept in mind. However, there are also things going on behind the scenes with how the magic systems work that I can’t discuss because of spoilers. Having said that, it does have a flair of originality that comes toward the end of the book, as well.

In my last review of The Challenger by Taran Matharu, I talked about Cade not learning from Thor because you don’t ever think or ask anything in the ballpark of how this could get worse.

Welp. Back to Ragnarok, we go. Yes. This is a younger YA novel, but still. I am going to quote the Hela from Ragnarok when she says…

Apparently, not. Because when the leader of the Magi comes and says (paraphrasing here) yes, I know you found this magical door, but I have something more important for you to do, then your parents kick you under the table? The proper response is yes, sir. Not, yes sir, but we are going to go sneaking around to figure out the door, behind everyone’s backs, including our parents.

Yes. I know. They are sixteen, and we don’t have a plot without it. And from the onset, it all seems sneaky suspicious. It all smells as rotten as the state of Denmark from there on out. However, maybe involve your parents, at least. They are the greatest spies in history for the Magi. They could help. Definitely don’t… oh, I can’t tell you that because of spoilers. Kids will be kids, though.

From there, things go south fast. I would be lying if I said I didn’t enjoy how it all goes south, though. Plus, so many themes are interwoven that I mentioned above because of the cascading effect of these decisions. And all of those (above) themes, wrap-up into questions of loyalty, and when loyalty isn’t as black and white as you thought.

Truth, perception, and lies don’t always draw pretty lines in the sand, easy to stand behind. Sometimes they intertangle. And if you stand in their crosshairs? It can cause a lot of anguish. Also, it takes bravery, courage, and the ability to leave behind everything your life stood for, a foundation your moral compass was built on, to find something unfamiliar and new.

MarcyKate Connolly walks this tightrope with precision. She writes her characters on this tight right imperfectly because no one could walk it, in real life and not make mistakes. Not any age.