Skip to content
Taran Matharu kicks off The Contender Trilogy with The Chosen. Matharu loads it with expansive landscapes, history, and incredible dialogue.

*It has come to my attention that there are changes since the Advanced Readers Copy (ARC) I obtained. Please note that my review and any quotes are based on the ARC provided. *

Dilemmas. Dilemmas. The Chosen by Taran Matharu left me with so many dilemmas. How do I pay homage to the multi-layered social constructs that Matharu weaves with a complex story of survival, choose your own adventure structure and landscape building that covers a Major in Paleontology and a Minor in World Civilizations? 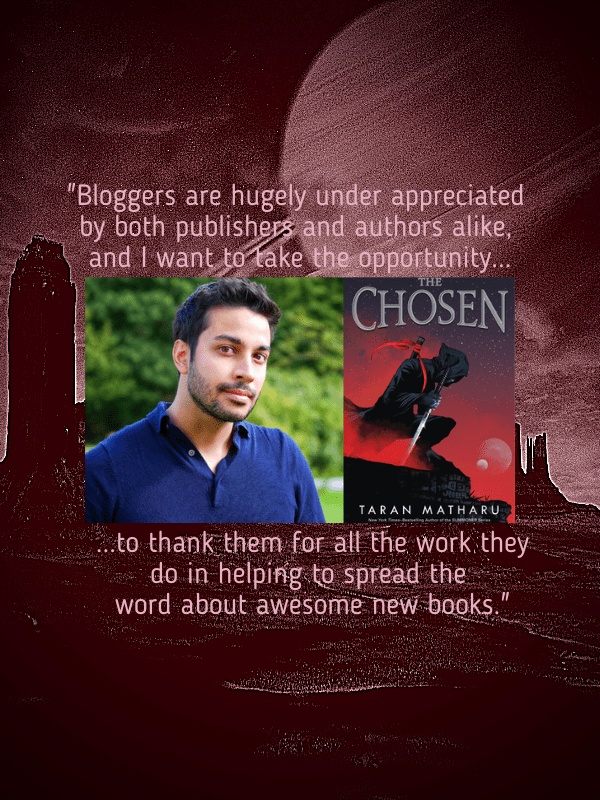 “To the young people in correctional facilities across the world…

With that opening sentence you know Matharu is out to make a statement. What you don’t know is how that statement will be unfurled and held true to such realistic paradigms. When Cade Carter, a biracial student in a prestigious boarding school, is framed for stealing a set of laptops by his well-off roommate, he is sent to a juvenile detention center.

Through a series of flashbacks, you follow Cade and fellow detainees between their current unknown time/date/place of survival and the prior six months that led them to there. Matharu utilizes this literary device to introduce us to multiple characters, their worldviews and how that shapes the pecking order of day-to-day life. White supremacy, physical dominance, and the bullying of those with higher intellect are not just explored but connected to current circumstances.
And what are those circumstances?

No one really knows. Not at first and not for a very long while. Piece by painful piece. One character at a time.

It is set-in multiple landscapes that run a timeline of civilization from prehistoric dinosaurs to Ancient Roman Legions, the lost Mayan City of Hueitapalan, the 1980s, and the present day. Environmental detail never bogs down story progression. Each time period is treated with equal attention and thought. Action sequences are written with a ferocity that lands readers right between characters and threats that face them.

The Chosen detainees find each other. Some come together. Some are willing to change for the greater good, quickly adapting and changing their beliefs. In witness of someone that cannot hear having greater knowledge and abilities than anyone else, knowledge, and ability that is essential to their survival? How can they not? Yet, quickly it is realized that for many, the same dynamics of the detention center still carry over.

Characters that hold a white supremacist’s world view keep to it, even in the face of a dangerous unknown, life, and death survival.

Readers are left combing through these multitudes of layers. As characters’ backstories are peeled away and many realize they have more in common than meets the eyes. Some carry guilt, belief in their actions, courage, and conviction. Characteristics are brought to a fevered, emotional pitch during a climactic battle that is written specifically to demonstrate the strengths of many characters that have lingered just beneath the surface but never given a chance to shine.

It becomes apparent that the half-dozen detainees or so that are suddenly thrust into these unfathomable circumstances have a certain skill set, knowledge, and/or ability that is essential to the survival of all. Despite this, even if it means their own downfall, it is paramount to those that cannot let go of their alpha status, based on a racist worldview that they hold tight to their grip on all control.

Need someone to take the physical risk? A group will choose the person deemed the most expendable or least worthy of the rest. Especially when a group includes people holding supremacist views. And so, Cade is thrown to the wolves. Desperate for someone who is an expert in ancient Roman history? Cade’s knowledge isn’t a precious gift to be seen as a saving grace. It is a threat. It causes suspicion.

Meanwhile, there is the looming threat of the qualifying round, the unknown puppetmaster- as in who is running this whole shebang, why are they are all there and well…WHAT IS GOING ON HERE? Not to mention the Codex, a version of R2-D2 that makes you want to bang your head against a wall until it bleeds.

If you think this all sounds like a complicated, overwhelming train wreck of a mess? Don’t. Matharu does a brilliant job driving a straight arrow of cohesion throughout every layer and connecting every dot of each piece. Caught up with the characters trying to solve the overarching puzzle of the qualifying round to save the earth, who is the puppet master, and then moving to survival mode? Then back to the social constructs that turned reading into a contact sport for me (and wow has it been a long time since I said that)?

If you are worried that this is a fantastical set-up for a disappointing ending? I can’t speak for the series, obviously. However, the first book will not disappoint.

Dialogue. This isn’t a spoiler. It is a general comment about what you will find towards the end of the book. Matharu has written some of the most jaw-dropping dialogue I have read in a very long time.

The Chosen includes cliffhangers but they aren’t the point. The Chosen ends in a unique way. The dialogue helps punt off to the second book, which leaves you breathless.

7 thoughts on “Multiple Time Periods, Worldviews and Puppet Masters Are Vividly Brought To Life by Taran Matharu in The Chosen (The Contender Series Book 1) Posted May 2019”