Skip to content
Today, I'm trying out a different review structure that I saw on Sam's site, The Bookwyrms Den. Go check her out. I linked her in my review of this summer's swash-buckling, frolicking, God filled action-packed Sin in the Steel by Ryan Van Loan!

Sin In The Steel by Ryan Van Loan

Yes. This is a departure from my typical reviews. I have seen Sam @TheBookwymsDen utilize it, and wanted to give it a shot. Go check out her site. She is fantastic at all the things, reviews, discussion posts. Plus she is a mom, she is working on multiple novels, and works in a library. She’s basically superwoman. Sin in the Steel by Ryan Van Loan was the perfect book to attempt this structure because there are many pieces of to love. Basically, I’m going to give you a list of reasons to read Ryan Van Loan’s Sin in the Steel. That being said, let us get right down to it! There are were a lot of Walking Dead comparisons I picked-up on reading Sin in the Steel. I don’t know if they were intentional or not. Coming from me, this is a compliment.

The main characters Buc and Eldin, play-off each other perfectly. Buc is the younger streetwise, deductive wiz. Eldin is the ex-soldier that took her off the streets. Together they are a crime-solving due for hire. Buc leaps before she looks, and Eldin keeps her from leaping right off cliffs. Oh, and Buc’s weapon of choice? A slingshot. Don’t take that for granted, though. She is mighty effective with that damn thing.

The rest of the cast is vivid. There is Chan Sha, a Pirate Queen AKA Widowmaker (YAS- QUEEN). Widowmaker? BAH! She is tracking another captain, known as the Ghost Captain, AKA Dead Walker. I know you see where that is going. It is further down the list! Along with some, others that we will get to, now.

You know I love me some meddling Gods. Sin in the Steel doesn’t just have meddling Gods. Nope. Ryan Van Loan has put a twist on meddling Gods. If anyone remembers my review from Fate of the Fallen (and my love for it), the Gods were loved. They were interfering with the fate of man, and their motive was pretty clear. It was time. Humanity had every chance to succeed, and their time had come. OK. There were other reasons, too. But I don’t want to spoil anything.

Gods tend to have specific roles in books, where their motives and interactions with people go one way. Without spoiling anything in Sin in the Steel, I’m just going to say that these Gods? Their motivations, their reasons, and their interference? It is an entirely different ballgame.

Speaking of the characters. The dynamics between them are exactly what was promised. Maybe I would have liked a little more of the Sherlockian vibe, but it was there. And there were some zingers. Especially from Buck. I loved her no fuck bucks given attitude when it came to speaking her mind. All characters have a flair for the dramatic with wit and sarcasm to boot.

“It may not be enough, but we must try. If she stops fighting so will we…”

…<Buc> snorted. “Even a faceless man would smell bullshit.”

To want to change the world, society, and the plight of the poor is one thing. To be self-aware of who you are and why you are doing it is quite another. Buc is that character, and she has that awareness, that purpose, and that drive.

If I had my way, no child would see what I had seen reflected in the flames that danced before my eyes all those years ago, when I burnt my old life. With enough power, I can prevent another horror like myself from being created. Eighteen months ago I began to see clearly for the first time in my short years.”

There is nothing righteous in that sentiment. Nor is there any kind of need to do good for good’s sake. Buc knows what and who she is. Furthermore, she knows what has created the hideous pieces within her, and is determined to eradicate them from the world. 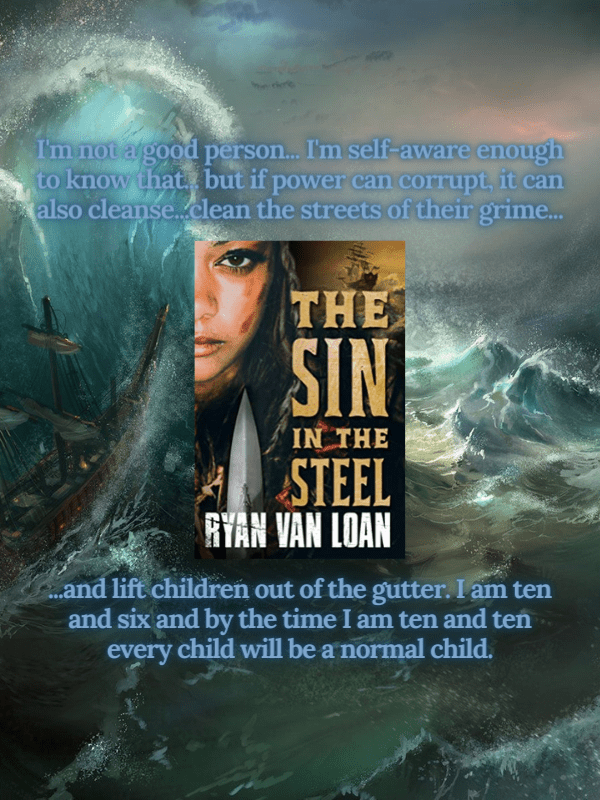 Thankyou Tor for an Arc in exchange for an honest review.

Reading is essential to Buc’s character, not something mentioned once and then forgotten. Throughout Sin in the Steel, Ryan Van Loan makes a point of writing into the story, what Buc knows, and has learned from reading. It isn’t useless knowledge, either. It is information that is key to the mysteries, obstacles, and issues at hand. Sin in the Steel states it right from the beginning and carries it right through.

Before I learned how to read, I thought knowledge was finite, dead and decaying inside old men’s skulls. Now I know the truth, that knowledge is living gold threaded through layers of dead parchment, just waiting to be mined.

I seriously did NOT see this coming. Sin in the Steel has many themes that are evergreen and, therefore, currently relevant as much as they have been throughout history. Ryan Van Loan embeds them without bashing you over the head or preaching about them. The themes do not hinder the story or bog it down at all. It is all very well played out. While I can’t go into details about them, I can give you a general idea.

This was some kind of exciting for me. It was at once, gripping and confusing. I knew Shambles had to be akin to zombies, but then there were definitely differences. So, I kind of felt like either I had missed something or was getting completely confused. In the end, the similarities outweighed the differences, so zombies it was. From there, it all clicked. In one part, that was utterly fantastic. A group of characters wore the Shambles clothes/inners etc… so the Shambles wouldn’t smell them, and they could get through. It was straight out of one of the best scenes in Walking Dead history.

Sin in the Steel bends into so many genres that Ryan Van Loan is the Gumbi of writers. Furthermore, he does it with precision. The genres don’t become a trainwreck or too much when he puts them together. Instead, it makes for a great romp.

There is something for everyone.

Ryan Van Loan has built out an enormous world, with a multitude of landscapes that are both on land and sea. While the first book in the Fall of the Gods series definitely explores a good deal of it, I can’t imagine there isn’t a lot more coming in book two. What we have experienced of it, so far, was detailed enough that nothing blended together.

In the description and the action that took place in each landscape, everything fits in the context of its environment and location within the storyline. I am excited to see how Ryan Van Loan further expands the world in book two.

There it is—ten reasons to read Sin in the Steel by Ryan Van Loan. I will say, in the wrap-up, that at times the sum of the parts did not equate to my love of each component. I’m not sure why that is, and so YMMV. I am definitely interested in the next installment of The Fall of the Gods, as I found so many exciting pieces of Sin in the Steel. When I finished it, I’m not sure why I felt underwhelmed when all my notes and tabs told me that there were so many pieces that I enjoyed so much.