Skip to content
With 19th Century Denmark as a backdrop, Emily Bain Murphy's Splinters of Scarlet explores the choices we make for the betterment of the ones we love and a better world, even if it is the detriment of ourselves. And whether or not anyone has the right to judge those decisions.

There was absolutely no reason for me not to like Emily Murphy’s Splinters of Scarlet. None. I went in with that expectation, which isn’t always good. That can set you up for a load of disappointment. I couldn’t help it. Based on the blurb (fine, I’ll give you the blurb in a minute), it had most of what I look for in sub-genre of fantasy (Young Adult or Adult). Now that I have read Splinters of Scarlet. I can honestly say that not only did Emily Murphy come through on all the components I expected from the blurb? Splinters of Scarlet has themes that are not mentioned, nor discussed in the blurb. I never saw them coming. Bain has embedded rarely touched upon ideas that go beyond the regular meshing of magic and politics that both engrossed and intrigued me.

Well, no, no, I didn’t. And didn’t you die at the end Ultron? So, you didn’t see things coming either. As far as I’m concerned? 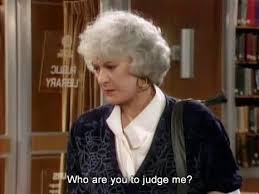 Thank you very much, Mr. Speedy pants that left Wanda alone. Moving on to the blurb, I promised you. This way you can easily refer to it when I say, here is something I didn’t (see above).

For Marit Olsen, magic is all about strategy: it flows freely through her blood, but every use leaves behind a deadly, ice-like build-up within her veins called the Firn. Marit knows how dangerous it is to let too much Firn build up—after all, it killed her sister—and she has vowed never to use her thread magic. But when Eve, a fellow orphan whom Marit views like a little sister, is adopted by the wealthy Helene Vestergaard, Marit will do anything to stay by Eve’s side.

She decides to risk the Firn and uses magic to secure a job as a seamstress in the Vestergaard household. But Marit has a second, hidden agenda: her father died while working in the Vestergaards’ jewel mines—and it might not have been an accident. The closer Marit gets to the truth about the Vestergaard family, the more she realizes she and everyone she’s come to love are in danger. When she finds herself in the middle of a treacherous deception that goes all the way up to the king of Denmark, magic may be the only thing that can save her—if it doesn’t kill her first.

Do You Believe In Magic

Emily Murphy developed a magic system for Splinters of Scarlet that is foreboding, brilliant, and deals direct consequences to those who yield it. For two years, Marit hasn’t utilized her magic. After watching her sister die from the Firn building up in her veins, she has worn it off. When Eve, who Marit considers an adopted little sister from her former orphanage, has the chance to be adopted, Marit gives in to the magic, making her the most spectacular dress possible.

And it works. Eve, a spectacular dancer, is adopted by a once gifted dancer, in her own right, Helene Vestergaard. Marit does not want to leave Eve, nor miss a chance to investigate the death of her father, who died in the Vestergaard mines. Helene needs a new seamstress and offers Marit the job. Helene knows Marit can only complete such exquisite work through her magical gifts. 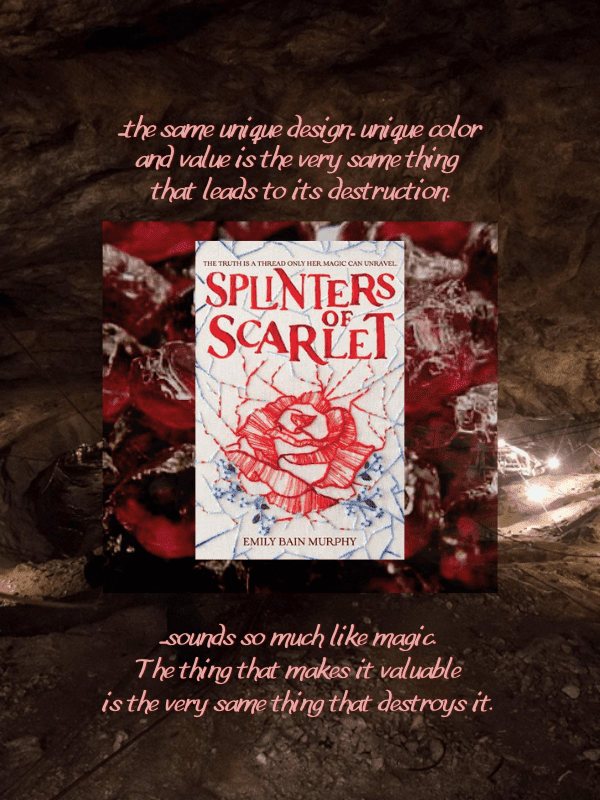 Thank You to HMH for an ARC in exchange for an honest review.

Eve has no clue that Marit possesses, let alone is utilizes such a splendid, yet toxic magic to create her dress, the day Helene adopts her. When both arrive at the Vestergaard House, Marit realizes she isn’t the only one. Helene’s entire staff is gifted (cursed) with the same powerful and deadly magic that allows them to complete their assigned duties at speed and expertise, expected. Marit tells Eve none of this information.

30 Minutes Of Wonderful Or A Lifetime Of Nothing

Does anyone remember this?

I don’t want to ruin the end of Steel Magnolias for anyone who hasn’t seen it, so I won’t. Whether you know the ending or not (I highly recommend the movie, if you haven’t seen it), the point is simple. Would you choose to have a short period where you are safe and comfortable or a long period that is full of poverty, hunger, possibly living on the street? This is where Murphy jumps the blurb of the book into levels of depth I did not see coming.

Orphans in Murphy’s 19th Century Denmark are put out on the street to find menial labor. Helene’s staff see themselves as blessed to live in a warm, beautiful home. They are taken care of, paid, and eat well. Even if that means using a power that takes time away from their life every time they dip into it.

Marit knows Eve would never approve of her choice. Eve would rather not get adopted than have Marit risk the magic in her veins. She would not choose for Marit to travel the same path as her older sister. The road that ultimately killed her. But that begs a much bigger question in Splinters of Scarlet, and life.

Does anyone get to make that choice, but those gifted with that magic? When women end up on the street, it isn’t safe. Chances are you will end up dead at some point, anyway. And beforehand? People are victims of human trafficking, rape, robbery, and put in jail. At any time, being in poverty, homeless or transient, is never safe. Who has the right to take that choice away? Who has the right to judge anyone for bettering their life through a dangerous, if not deadly, skill?

Think about it. Deep down, we all make decisions that impact our bodies, to better our lives, achieve goals. Helene recognizes it, and she’s tired of the accusations. The truth she finally expresses isn’t just her truth. I’d hedge a bet that it is rude for many.

“Everyone makes their choices,” she finally says… “if it’s worth it to them or not. I pay them well.”

“You think I don’t know what it’s like to pay a price, to give up part of my life for something? What do you think ballet is? It took years of my life that I spent practicing and rehearsing, all for those few moments a night on a stage. It weekend my body, cost me in injury. And now it’s gone. It might not have taken years from the end of my life, but it cost me art of my life all the same… Everyone makes their own choices.”

Everybody Wants To Rule The World

I have song titles on the mind, tonight.

After arriving with Eve, it isn’t long before she realizes they are pawns in a much larger chess game. A chess game that involved her father’s death in the mine. It is a chess game that runs deep within Denmark’s political and world ambitions among significant powers.

Murphy weaves magic into 19th Century Denmark, building out the world of the wealthy elite, along with decaying streets of poverty. It also plays into the politics of the time, when Denmark looked to war as a path to world domination.

I’ve now reached a place where nothing delights me more than throwing dark magic on top of dark periods in history (see A Declaration of the Rights of Magicians – although Splinters of Scarlet is Young Adult and Declaration is Adult, to be precise).