Skip to content
Alexis Henderson's debut novel, The Year of the Witching, will release via Ace Books on 7/21. I have pre-ordered the audible and the hardback (unless it comes out in a subscription box- then it'll be the audible and the subscription box). It isn't fair that this is her debut and that within in it, Henderson has created the new Gold Standard for female characters. Immanuelle is unbreakable in the face of darkness she did not create, through sins not her own, but threatening to drown her, none the less, while staring down the barrel of an abusive, oppressive, and patriarchal society.

Year Of The Witching By Alexis Henderson

I finished The Year of the Witching by Alexis Henderson at the beginning of the week. I immediately ran to my laptop, prepared to write my review. Then, I opened WordPress and became a babbling idiot. I lost all ability to word, vocabulary, and communicate. I tore through the thesaurus and then cursed it. Maybe I could write my review of Alexis Henderson’s debut in elvish? No. I could not.

So, I slept on it. The next day? Wash. Rinse. Repeat. Today, I don’t care if it takes the entire day, I’m going to write my tribute to The Year of the Witching. To accomplish this goal, I’m setting three essential bullet points that I need to accomplish. It might seem like common sense. However, ask anyone that has visited my site, and I don’t believe that you will hear streamlined and straight forward as review descriptors. So, for me, this is pretty revolutionary. Here are my three guiding points:

Don’t get me wrong. Right off the bat, Henderson put me at ease by letting me know that at the very least, The Year of the Witching would deliver on its promise.

A mangle of teeth and eyes and rendered flesh. The tulip of what might have been the creature’s womanhood or perhaps an open mouth. Broken fingers and disembodied eyes with slits for pupils. Inexplicably, the ink still looked wet, and it rippled toward the edges of the papers as if, threatening to spill onto the bed, soak the sheets black.

And from there, Henderson ups the ante on the level of horror, not just through the graphic and inventive ways she utilizes witchcraft, sigils, and plagues. The palpable progression of paranormal horrors collide with those created by a patriarchal society, and compelling themes Henderson has been establishing throughout The Year of the Witching. It is at this intersection that Henderson’s writing becomes intoxicating.

There are fantastic horror/occult books, and then there are fiercely, bravely written horror/occult books that take on more. It is what makes excellent fiction brilliant. It has all the shock value, all the entertainment value, and all the gore you want. Then while you are greedily gorging on that piece, there is another type of horror story being told.

That horror story is the one created by society. Year of the Witching equally pulls out all the stops on each front. And then effortlessly entwines them together without pulling punches, and is brutally honest. Yet, with all its intensity and social themes, never once did it feel preachy (except for when men used scripture to control, literally- and, well, that’s the point).

That is quite the tightrope to walk, but Henderson walked it like a pro, which she isn’t supposed to do, is she? After all, The Year of the Witching is Alexis Henderson’s debut novel. How can this possibly be her debut novel? And we haven’t even talked about Immanuelle yet. That’s next. 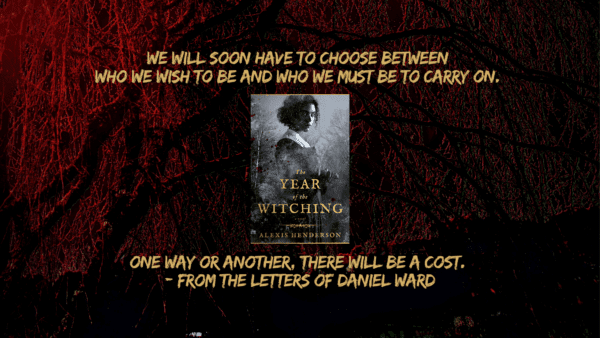 Thank you to Ace for an ARC in exchange for an honest review.

“As for the girls like Immanuelle – the ones from the Outskirts, with dark skin and raven-black curls, cheekbones as keen as cut stone- well, the Scriptures never mentioned them at all. There were no statues or paintings rendered in their likeness, no poems or stories penned in their honor. They went unmentioned, unseen.”‘

And STILL, she wants to try and save Bethel. Would I?  Multiple times I noted in my Kindle- but why? Do you have to? Really? But, by the end of the book. I understood, with stunning, blinding clarity why (as the summary states), changing herself, was not enough. She had to start with herself, but she has to try and shift Bethel, too.

In that clarity, through Henderson’s damning dialogue, inner-narrative when Immanuelle comes to stand not just in her truth but in Bethel’s fact. And in those moments, you stand side-by-side with Immanuelle. As the darkest pieces lock into place, and realization ignites her fervor and cracks your soul, for Immanuelle, for Bethel, and the knowledge that those horrors are still alive, and well today.

Tags: Alexis Henderson July 2020 June 2020 The Year of the Witching