Skip to content
There are spoilers for both Unravel the Dusk and Spin the Dawn AFTER the first section!

Unravel The Dusk By Elizabeth Lim

This section is your warning. It is the only section that will be spoiler-free. And by spoiler-free, I mean this BOTH BOOKS. I repeat This review will contain spoilers for both Spin the Dawn AND Unravel the Dusk THROUGHOUT the review. There was, in this rare instance, no way for me to separate the spoiler and put it at the bottom. It is too intertwined with my overall review. It would be too confusing a review for me to try and give a complete review of Elizabeth Lim’s Spin the Dawn Duology without talking about Unravel the Dusk in full, throughout the review. So, once this section ends, I will put some space, and then there will be spoilers.

Unravel the Dusk did the one thing I asked of it. It went dark, with a quickness. If you thought this was a negative? I say nay-nay, not because I want less romance or dark books. It is a legitimate pushback. If you force the relationship between Edan and Maia, while keeping the tone from Spin the Dawn, Unravel the Dusk becomes a very unrealistic, inconsistent book. The mood will not align with Maia’s character arc. It will not make sense at all.

Also, I want to thank Elizabeth Lim for being my very first interview during the first annual Summer Fling, just before Spin the Dawn released!

At the end of Spin the Dawn, you had to see the darkness coming. She is turning into a demon. Did you expect this to stay on a rainbow path of puppy dogs, rainbows, and playing footsie with Edan? That would make absolutely NO SENSE whatsoever. Lim would have to betray everything she set-up in Spin the Dawn. But she didn’t. Unravel the Dusk is written precisely as it should be. It is dark, raw, and cruel because turning into a demon sucks. Sending the boy, you love away, and it tears you apart. None of this is pleasant, but Maia does what she has to do.

But then, in the end, one thing screwed it all up. So, stop reading now and excuse me while I break my own heart.

Elizabeth Lim Did Everything Right And Yet 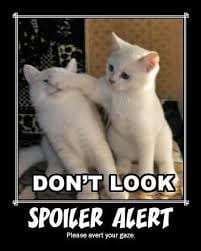 You are now reading at your own risk. How does an author do everything right and yet manage to get it wrong? By doing one thing in the 34th chapter of a 35-chapter book. I would say it comes down to the post that featured on the landing page of my site, which I refer to quite a bit. Except, in this case, it goes beyond even that post. I say it goes beyond THAT post (relax, I’m getting there) because, as I stated in said post, as much as it angers me. I’ve yet to have it make me completely dislike a book.

UNTIL NOW. So yes, it goes even beyond

I’m linking my death rant post because if I try to explain it, in this post. This post will cross a record length that no one needs so, as it is there if you need it. Towards the end of Chapter 34, Maia does go full demon as she should. There shouldn’t be a get out of demon free card. This is the basis of the whole duology. Every choice and decision Maia has made throughout Unravel the Dusk has been based on this fact. So, as heartbreaking as it is, and should be, it needs to happen. And Lim deserves a standing ovation. If we didn’t care about Maia and all the other characters in the duology, I wouldn’t give one fuck buck about what happens to Maia, Lady Sarnai, Edan, or anyone else for that matter.

But here’s the thing, because Elizabeth Lim is an incredible, brave, and brilliant writer, I did. I rooted for all of them. I cried for all of them, and I was destroyed by all of what they went through. My heart bled for them.

And so, I ask you. Why, in the name of the literary world, would Lim undo all of that incredible writing? All of the torture she put readers through, that we ask writers to put us through, by giving Maia, A CHOICE?!

When Maia went full-fledged demon and died, that was even a little bit off-course. She was supposed to live her life as a demon and not remember anyone, as a guardian. However, she did destroy the islands. Lim wrote it well, both in the magic system and into the world-building. So, I can swallow that. When Maia ended-up dead, free, and reunited with her Mom, I felt good about it.

Unravel the Dusk had been incredibly dark, twisted story that dealt in dark magic. It wasn’t a happy ending, by far.

There was a lot of death in the end and heartbreak in the final battle scene. Letting Maia just die into peace was acceptable because it still wasn’t a happy ending.

I teared up when she reunited with her Mom and felt free, warm, and light for the first time since she made the deal to free Edan from his oath.

It was brave, courageous writing, which wrapped-up a brilliant duology. It started as a young, beautiful princess-like tale and grew-up to be a dark, teenage, twisted macabre. Then Maia’s Mom uttered the most devastating words possible.

Your brothers and I pled your case, and Amana listened. She offers you a choice.” Mama took a deep breath, and my heart hammered through the silence.

“To stay here with us, a tailor to the Gods.” Mama’s voice was hoarse. “Or go back, to be with Baba and Keton, and with your enchanter.”

In those two lines, Lim took the entirety of her brave, brilliant work and #rimshot, unraveled it. Maia said in her letter to Edan… 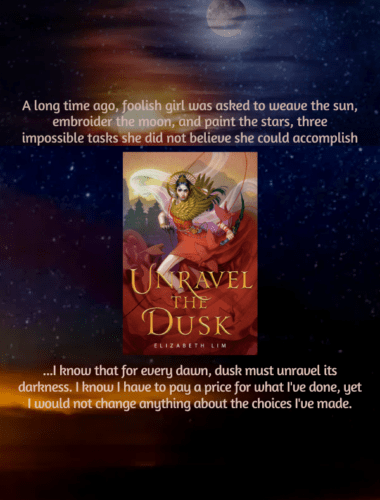 Thank you to Knopf Books, Edelweiss and NetGalley for an ARC in exchange for an honest review

Lim writes it into Maia’s character. She knows she has to pay the price, but she wouldn’t change one choice she’s made.

And then, at the very end. When push comes to shove? She doesn’t have to pay for anything. And that undoes everything. When you take away the certainty of death, you take away consequence, drama, and all the emotional build-up. It is all undone, and you feel cheated for being so invested, the entire book.

*And I ask that before you push back on all the exceptions to the above, you at least skim my rant because I’m aware and I went through them. However, if you still have some thoughts after reading my rant, please let me have it. I most definitely want to hear them.*

I chose to because Spin the Dawn ended on a very dark, melancholy note. It was my hope that Unravel the Dusk would run with it. And it did.

The characters in Spin the Dawn, only get stronger in Unravel the Dusk. The world gets more vibrant, and the magic system continues to marvel.

Lim crafts dialogue that ranges from beautiful to cut-throat in the blink of an eye. On the same note, her narrative knows no limits. As dark, grotesque, and foreboding as it gets, the action is crystal clear, bloody, and accurate to the warriors fighting.

Maia’s inner dialogue as she wages war within herself is heartbreaking. There is no question about how hard she is fighting to hold onto herself and do right by everyone involved. Lady Sarnai’s arc in Unravel the Dusk is ferocious. Love her, hate her or bounce back and forth. It is engrossing, either way.

There is so much to love about this duology. For me, it was a terrible shame that, in the end, it had to be undone by a lack of consequence that made everything I invested feel wasted.

But it happens. So be brave and kill the characters we love. Just don’t bring them back, damn it. My pain is worth more than that.

5 thoughts on “Unravel The Dusk Ends The Spin The Dawn Duology On A Dark, Tormented, Raw Tone That Fit Maia’s Arc Perfectly”