Skip to content
Seven Lies was mediocre at best until the end and that just threw it into the deep end of the great salt lakes.

The Best part of this whole dumpster fire is that apparently, and someone correct me if I am wrong, Elizabeth Kay is a pen name for an international publicist who decided to write Seven Lies. In fact, I believe (but again someone clarify if I’m wrong), one of the marketing points was that she knows the business and would do anything to succeed. That is how Seven Lies, Elizabeth Kay’s debut book, came into the world. Unfortunately, since I didn’t bring it into the world, I cannot take Seven Lies out of the world

Since this is going to the land of salt lakes, and it is an Adult Psychological Thriller, I feel the need to be very thorough in my defense of why. Some are easier to do than others, depending on the narrative structure of the book. Seven Lies is not one of the easier books. For that reason, this will be one of the rare times I provide the summary.

I hope this will assure you that my vagueness is not an attempt to duck out of the defense of my opinion, (Seven Lies doesn’t release until 6/16), nor am I spoiling anything. Those who have read my site long enough know that I don’t deal in spoilers unless there is a very clear warning. 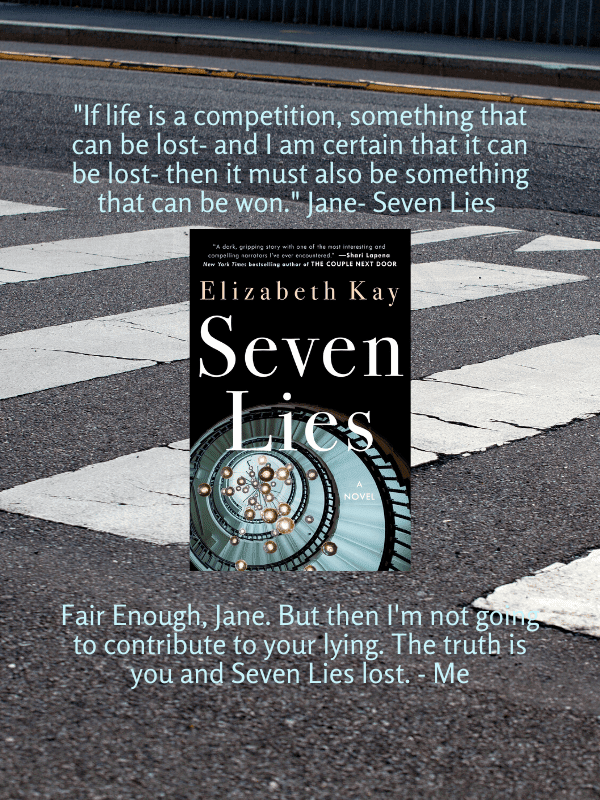 Thank you to Pamela Dorman Books for an ARC in exchange for an honest review.

It all started with just one little lie. But we all know that it never ends there. Because, of course, one lie leads to another…

Growing up, Jane and Marnie shared everything. They knew the other’s deepest secrets. They wouldn’t have had it any other way. But when Marnie falls in love, things begin to change. Because Jane has a secret: she loathes Marnie’s wealthy, priggish husband.

So, when Marnie asks if she likes him, Jane tells her first lie. After all, even best friends keep some things to themselves. If she had been honest, then perhaps her best friend’s husband might still be alive today… For, of course, it’s not the last lie. In fact, it’s only the beginning… Seven Lies is Jane’s confession of the truth—her truth

I almost feel like Kay sat down and legit thought that if she took a bunch of despicable characters, and threw them into a horrific plot that had a horrible ending, everyone would love it. And reading that sentence, I can see how that could possibly work.

What you have here is a bunch of despicable characters that are miserable, sad, delusional, pompous, co-dependent, passive-aggressive, completely selfish, and/or a mix of these lovely traits. Throw that into a blender with a barely meh plot, which ends in such a vile, horrific, disgusting, and stupid reveal that I was both dumb stricken, and repulsed, simultaneously. 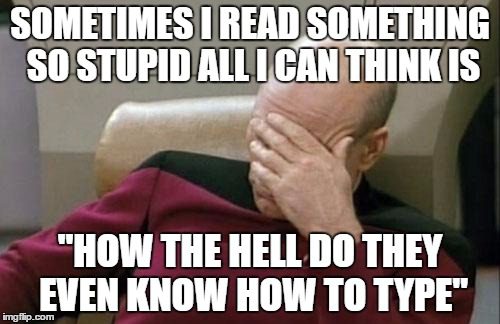 Look. If you are going to swing for the fences on the shock and awe scale of endings? Don’t waste it on something so asinine.

At least make the ending twisty, juicy, and brilliant. Make it one that readers feel guilty for relishing in because they know they should know better but can’t help themselves. Or, here’s a thought! Make the entire book worthy of such an ending.

Half The Lies You Tell Ain’t True

I wouldn’t eve scream plot holes. Although, there are a number of convenient incidents that allow essential events to take place. If this was an incredible book, I probably wouldn’t even mention them. Even if I did, they aren’t so egregious, as to detract from the story.  So, no, that isn’t what I mean by Half the Lies You Tell Ain’t True.

A great Psychological Thriller no, wait. Let me back up a second. This is actually two separate issues.

Like when I read The Split by S.J Bolton. It got to a point where I was literally taking notes. I was determined to beat Bolton.

I did not beat Bolton.

I’m not sure exactly at what point this happens. Not too far in. With Seven Lies, it was around the 30% mark that clues started to drop. Obvious clues. They weren’t even well embedded. It was set-up in a very obvious way that just didn’t add up. When the first one popped-up, my interest piqued, of course. The second one came, and I sat and thought for quite a bit. Then, I caught the third one and I was really baffled. But, not in the good way. I was just sitting there thinking, this makes NO SENSE on any level of reality.

She promised them the truth and she is giving it to them. However, the clues don’t add-up, in the context of the characters in the story, and who who Jand could possibly be confessing to.

I never actually wanted to DNF it. Although, looking back, I’m not sure why. I did, on many occasions just want to jump to the end and find out who Jane was talking to, because it was driving me insane.

My gut was screaming that this was going to be stupid, ridiculous. And it was even worse than that. I think I figured if I quelled my curiosity, maybe I could enjoy the rest of the book.

That would not have worked.

There isn’t much more to say about it. It is, as we would say in Brooklyn Italian/Southern Italian slang, Stunod. On top of that (as I’ve said before), it is gross, disgusting and vile. Even if you liked the rest of the book, the ending would have, I believe, killed it for you.

Speaking of Brooklyn Italian/Southern Italian slang. It gave me ajita (a feeling of agitation or stomach upset or heartburn).

Oh and: Stunod is Southern Italian dialect for “stupid” or having one’s head in the clouds and not paying attention, from the Italian “stonato” which means, “out of tune”.

I figured if nothing else, you should get something out of this review other than not to read Seven Lies because there are many phenomenal Adult Psychological Thrillers that have or will be coming out this spring/summer. Keep up with them in the Spring/Summer Fling 2020. This way I can save you this kind of pain.

5 thoughts on “Seven Lies By Elizabeth Kay Is All About What A Tangled Web We Weave… So Let Me Untangle It For You… The Truth Is, Just Don’t.”