Skip to content
The Last Flight By Julie Clark Departs on June 23rd, featuring two strong female leads tackling social themes and a twisted plot that will keep readers glued till the end. This is One Flight You Don't Want To Miss.

The Last Flight By Julie Clark

We all want to get away. Bad days. Bad weeks. Right now, I think we can all agree that 2020 is drunk and needs to take its ass home. So, if the chance came to take off and get the hell out of this mess, we would take it. That is everyday adulting stuff, though. Well, not the 2020 thing. That we will have to get through, together. There is no flight departing from 2020 and arriving post-whatever this is. The Last Flight by Julie Clark tackles a whole different type of escape.

Clark’s thriller isn’t just about getting away. To get away insinuates that you will come back. The Last Flight is about disappearing. To disappear insinuates you vanish and when you vanish, you cease to exist. For main characters Eva and Claire, vanishing is the only hope they have for surviving. Clark weaves the stories of Claire and Eva’s survival, which is to say, the how, and why, they vanish.

Many, not all, but many psychological thrillers involve on weak-willed, whiny woman as the main character. They get taken advantage of, are passive-aggressive, sit in their situation or are manipulating, entitled, brats who do not take responsibility for anything. The best female based thriller/suspense novels are those that have strong, engaging and empathetic female leads.

The Last Flight has two strong female leads that both have very different, but disastrous situations that they are trying to escape. Claire has married into a Kennedy type family. Her husband, Rory, is next in line for political greatness behind a mother who was beloved and died too soon, from Cancer. He is smooth and charming and everyone is rooting for him. To the point that there is no issue looking the other way when his first wife dies in a mysterious fire. 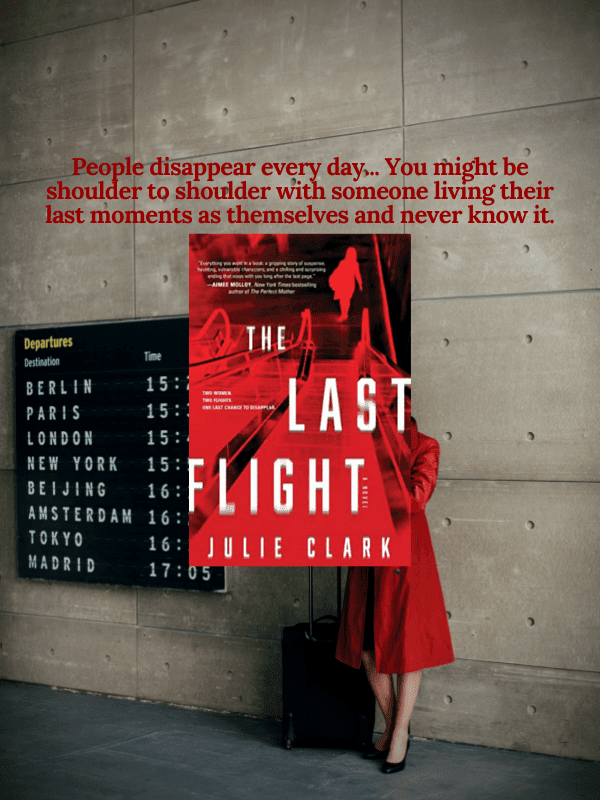 Thank you to Sourcebooks Landmark for an ARC in exchange for an honest review.

Those closest to them can tell Rory hounds Claire on her schedule, to be perfect. That often, she has just a little too much make-up on. That there are sinister underpinnings to what seems like an otherwise perfect pairing. Nothing Claire does is good enough for her husband, and he is going to make her pay a physical price for it, every time.

Eva was abandoned by a young mother struggling with addiction. Despite growing up in an orphanage, she got herself all the way to Berkley. Circumstances set her up to be thrown under the bus and evicted, put her in a no-win situation. From there, Eva’s life spirals into a situation that solves everything in the short-term but puts her in danger that she can’t escape, in the long-term.

It is easier to talk about Claire’s situation than Eva’s without spoilers. I’ll explain why in a bit.

The Last Flight is the first book I’ve read by Julie Clark. One of the most fascinating things I found about how she unraveled the story was the set-up of the timeline. I’ve read many stories that give you a prologue and then back you up six months and then end at the prologue. However, that wasn’t quite the case here. You have a very short prologue the day the two women meet at the airport. Then the timelines deviate.

We follow Claire as she goes forward from after her flight takes off. At the same time, we go backwards and read Eva’s life six months leading up to the day at the airport. It sounds confusing and it could have easily been. However, and I can’t say where Eva’s character is left before the rewind takes place, but it is enthralling.

While we read all the insanity that takes place with Claire once she gets to Berkley, we are left to wonder what the hell happened to Eva from where we left her, because we don’t know?! No one knows. And at the same time, we get thrust into the drama that was Eva’s life in the months that lead up to her wanting to make this massive decision to vanish in the first place.

Much like a few times in the rest of the book… whew boy.

There was so much groundwork laid throughout the book that I thought was just masterful character building. I thought Claire and Eva were brilliant characters that were strong, relatable and that I could invest in because the time was taken to flush them out. Don’t get me wrong. That is ALL true.

Then I got to the end. Then, I realized. I was lulled into this beautiful storytelling when there was so much more at play… it was all right there. I just never saw the bullet train coming, until it was too late to get out of the way.