Skip to content
Kingdom of Liars by Nick Martell is a big concept with a lot of potential but tends to divert into a state of of confusion.

Kingdom of Liars By Nick Martell

Here is what I know for sure. It is a big concept that Nick Martell has taken on with Kingdom of Liars (The Legacy of the Mercenary King #1), no doubt. I give him full credit for the concept behind the book. It is what drew me to request the ARC, in the first place. I wonder, however, if it was too big. When you are working within the idea of stolen memories, you are almost working without any boundaries. As the Beatles taught the world, to break the rules, first, you must master the rules.

That, in my opinion is the downfall of Kingdom of Liars. It gets too lost in itself. Martell gets to play with so many toys and make, and break so many of the rules that indulgence would be near impossible, even for the most experienced writers. Add on to that, a fabrication magic system (that sometimes allows for two fabrications at once), a kingdom in rebellion, a once noble family cast-off as traitors (that doesn’t seem to fit in with the rebellion or the current ruling family), and a group of mercenaries. It is… A LOT.

It is a lot of characters, a lot of groups, a lot of systems, a lot of back histories, a lot of a lot. And if I’m being honest? I don’t know if I have all of the above exactly right or included everything because at numerous points? There were so many memories revealed that undid previous memory reveals, overlapping with other people that suddenly became other people due to memory reveals that I was insanely confused. It was almost like watching Vanilla Sky or Inception.

Six Hundred Pages Is A Lot…

… or not. The first installment of The Legacy of the Mercenary King is just over six-hundred pages long and as the first in a fantasy series has to accomplish some foundational goals. Martell overshoots on the plot, leaving many of these foundational pieces (many mentioned above, in the first section) severely unexplained.

The prologue easily catches your attention. However, I wonder if it actually did the story trajectory a disservice. It forces Martell to get back to that point by the end of the book. This rushes him through the plot and leaves so much of the above unexplained. Kingdom of Liars would have been much better served with a flushing out of the magic system, the politics that led to the relationship dynamics that were played out. 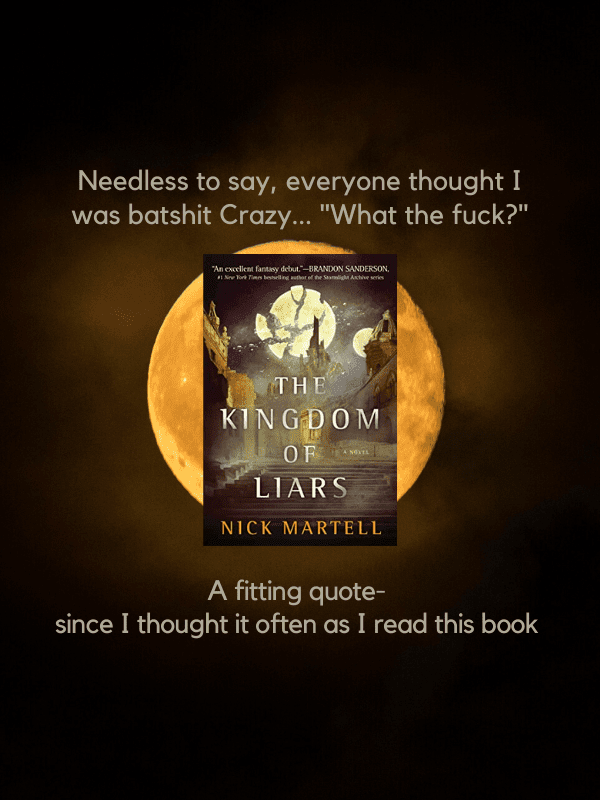 Thank you to Gallery/Saga Press for an ARC in exchange for an honest review.

There were many times that I felt like a scene was supposed to be very intense and I was left on the sidelines, out of the loop on an inside joke because I didn’t know all the information needed to get it. If there was more background between the hundreds of characters and the relationships between them, I would have been more invested in the story, the climatic scenes and the relationships, themselves.

I couldn’t spoil the end if you paid me so don’t even worry about how I wrap this puppy up. The last 25% of this book left me so batshit confused I forgot my own name at some point. You can have too many reveals. Kingdom of Liars taught me that lesson. Maybe it isn’t even that there were too many reveals.

It is more like I stopped believing them after a while or they just stopped making sense. Every time I thought I knew and was like, “AHA!” Someone else grabbed Michael and made him think and think… or tell me a story Michael. I swear if one more person told Michael to tell him a story and then said no not that story. Tell me another story Michael. I swear this went on for easily a whole chapter before he got to another HUGE REVEAL MEMORY. And even that memory WASN’T THE WHOLE STORY… I don’t think. Maybe it was… I’m confused… no. It wasn’t. It definitely wasn’t. There were even more pieces to THAT puzzle that filled in gaps.

Do you see what I’m saying, here? I mean after a while; it was just exhausting. At some point I was waiting for him to just not care anymore. I didn’t know if I cared anymore. And yet I kept going. Truthfully, there were multiple points in the book that I really didn’t want to keep going, but I did. The final, final end?

Yes. I can see where the series is going but if it keeps on being written like this? I can’t. I’m not trying to be mean. I can’t be salty. It is a huge concept and good for Martell for going big. It is just exhausting as is. Especially, at the end. Maybe it’ll get better as it goes on. I hope it does because it has a lot of potential.