Skip to content
House of Dragons releases on 5/12 and if this is your type of read? Then clear your calendar because reading House of Dragons should be your only plans for tomorrow. PS Dear Netflix... THIS. NOW.

House Of Dragons And Captain America

It is always nice, on that rare occasion when I actually have a reference point for the comparison titles for a book. With House of Dragons, hot damn! I get the references. Mind you I haven’t actually read Three Dark Crowns (I have just started it), but I know the gist of it. I’ve watched The Breakfast Club numerous times. Here’s the thing.

Truthfully ever since everyone’s big marketing blitz was, “let’s compare everything to Six of Crows,” I kinda started ignoring it all, anyway because nothing ever was like Six of Crows and secondly? It wasn’t fair to the books and authors. A lot of AMAZING books got compared to Six of Crows for no good reason. It was just stupid marketing.

In my honest opinion? A much better comparison (although, again read the previous statement) is somewhere between the Hunger Games (which I’ve never read and have only seen the movies) and Game of Thrones.

I think those aren’t even comparisons as much as sparks of recognition during specific plot points that I could point to and say, maybe this was influenced by “X.” Also, as far as Game of Thrones? Maybe the last ten percent, there were times here and there that were a little on the nose. Overall, though? Cluess actually fixed things a lot of people complained about when it came to the female roles and how women were treated throughout the series.

Here is the key, though. Whether you pick up on any of it or not? It is not continuous throughout the book. This is ESSENTIAL TO UNDERSTAND: House of Dragons is, easily, one of the most unique books I’ve read in ages. Whether it has influences at certain points or not? You cannot say this book is any one comp from beginning to end. It is one of the more unique YA Fantasy books, I’ve read in a long time.

What Is House Of Dragons Then?

Five royal houses will hear the call to compete in the Trial for the dragon throne. A liar, a soldier, a servant, a thief, and a murderer will answer it. Who will win? When the Emperor dies, the five royal houses of Etrusia attend the Call, where one of their own will be selected to compete for the throne. It is always the oldest child, the one who has been preparing for years to compete in the Trial. But this year is different. This year these five outcasts will answer the call….

THE LIAR: Emilia must hide her dark magic or be put to death. THE SOLDIER: Lucian is a warrior who has sworn to never lift a sword again. THE SERVANT: Vespir is a dragon trainer whose skills alone will keep her in the game. THE THIEF: Ajax knows that nothing is free—he must take what he wants. THE MURDERER: Hyperia was born to rule and will stop at nothing to take her throne. 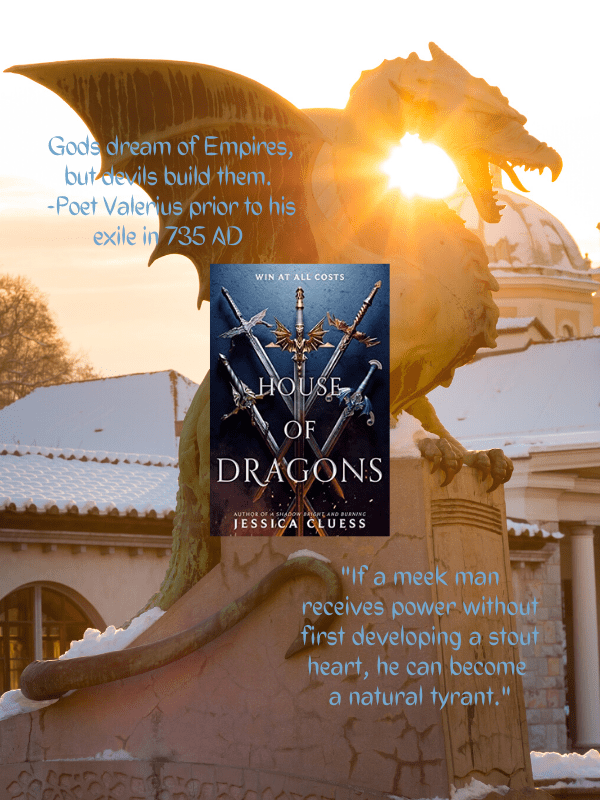 Thank You to RandomHouse and Edelweiss for an Arc in exchange for an honest review.

I’m going to use the above as a starting point and to keep me from rambling into a 3,000-word dissertation (I’m really trying to stop that habit). Here is where House of Dragons finds its inspiration (in my opinion) from The Hunger Games and Game of Thrones.

The Hunger Games is just a general structure. One chosen child from each house goes through a life or death competition that is composed of a series of trials. It is life or death. You become Emperor/Empress, or you die. That is as far as The Hunger Games piece goes. Also- NOT DYSTOPIAN AT ALL

Game of Thrones- You have the houses that all know each other, the political intrigue, the behind the back dealings between the houses, dragons (of course), the fight for the throne, and the five themselves. They all have secrets. They all have traumas. Quite simply. They are all fucking mess.

Throughout the book there are plot points where you see these pieces and inspirations come into play. And she does it really well. But then there is so much beyond that, that Cluess throws into House of Dragons and it is BRILLIANT.  That is what makes it so special.

These aren’t just your typical dragons that are in all the books. These dragons have personalities. They are thinking dragons with feelings and instincts. The dragons and their bonds to their riders are amazing. Their souls are intertwined. When its rider dies, the dragon eats the rider so that the rider’s soul lives forever within the dragon. Your bond with your dragon is greater than a bond between mother and child, wife and husband. It is pure. Often, it is a reflection of who you are because you shape each other.

It isn’t just about dragons, a kingdom, a competition and a throne.

However, there is Emilia: The Liar who is hiding her dark magic- chaotic ways. That gets thrown into the mix. That same High Priest/Priestess are running the empire and the competition for the throne until one of the five are chosen.

How can this possibly end well?

I didn’t even know what to do with this section. But let me try. Look man. If one of the five players don’t gob smack you? Their family/house will. If that doesn’t? Then the politics will? I mean from the first chapter to the last, House of Dragons is one big…

Sometimes it is even a character or house that you think is going to do something to piss you off more. Then they end up doing something to make you cheer them on despite yourself and then you are just like…

Or even better- you find out their back story and then you are like. AW, COME ON MAN. Now how the hell am I supposed to root against this person or not like them after I just read all the industrial strength tenth level fuckery they went through in their lives? I mean some straight up DEVASTATING, next level wrecks. But when I say that Cluess steps up to not just create some strong female characters but enacts that power in ways you don’t see coming? I’m not kidding.

Even the most power hungry of them display a sense of selflessness and honor that is undeniable. At times when it is in her best interest to be a gender trader? She tells the house trying to bargain for sex slaves that she will destroy them and then promises to behead her dad when she wins the competition (not a spoiler- it is like 1/3 through the book at one of the trials and she’s just making a threat because that is what her character is about) for putting her in that position, in the first place. Cluess is not fucking around.

Crystal Clear. Crystal. That is what I want to end on.

There is not a doubt in my mind what each character looks like, what each dragon looks like and what the major landscapes look like. Now there are A LOT of them. Being the first book in a series, like any, it can be a little much at times. This is especially true when going through the different houses and multitudes of dragons. BUT it is definitely worth it, and I can’t wait to see more of it throughout the series.

However, the main chess pieces on the board? And the most important landscapes, the world (and I imagine when I see the map in the book will be a game changer), I could picture it all with a clarity that is rare.

From the different houses where the characters came from to where each trial takes place, until they get to Dragonspire? It was all done with detailed finesse. The battle scenes between dragons, in midair were breath taking. The hand to hand combat right upfront? It was extraordinary in not just the battles but the emotional pull. No matter who you were rooting for, you felt the pain, anger, angst and determination for everyone involved throughout the book. In every trial, ever scene and every battle. Right up till the end. It was thrilling.

Cluess’ talent for not just world building, but picturing the characters features, how they hold themselves and their interactions with each other was cinematic. IMAX cinematic.

7 thoughts on “House Of Dragons by Jessica Cluess IS Crashing Bookstores 5/12, It Needs To Crash NetFlix- Make No Plans Tomorrow- This Is Your Plan”