Skip to content
Girl with Razor Hearts builds on Girls with Sharp Sticks and finally tackles the vigilante theme fearlessly and appropriately.

I had thought the bookish world was a fair, kind and caring community. I really did. Except, apparently, I was wrong. You all knew. Well. If you were paying attention, you knew. I was about to read Girls with Sharp Sticks in preparation for my ARC of Girls with Razor Hearts. Yet, not ONE PERSON warned me. NOT ONE PERSON. That? That is just cruel. Someone. Anyone. Could have given me a heads up. Just a simple- hey! Susan, just a warning. Girls with Sharp Sticks is a mind bend of epic proportions. Hey! Susan- don’t plan on functioning like a normal person for the last half of the book and for the love of your digestive system? Don’t eat or drink anything while reading the last hundred pages. We really don’t want you to eat, choke, pass out and hit your head.

However, At least in the above, I did for you what no one did for me. I provided fair warning for all those looking to dive into this series.

It will grab you, not let you go, and then it will break you. Suzanne Young is brave and fearless. And this is coming from someone who rarely does straight sci-fi. Suzanne Young (never read her books before) is a fearless writer who has no care for our affliction. These books will change you. And it is completely worth every second.

In all the <insert number> I don’t know how many reviews that have been done for Girls with Sharp Sticks, let me not repeat what has already been said. That is unnecessary and part of why I am not doing a separate review.  So, I want to, instead, say something a bit personal about it.

Bob Dylan (NO I’M NOT THAT OLD- MY PARENTS WERE HIPPIES) wrote a song. He wrote a lot of songs but beside the point. It Ain’t Me Babe,on the surface is basically a break-up song, except, it isn’t. It is also Bob Dylan breaking up with the folk movement.  The whole point being, I’m not your savior. I don’t have all the answers and I’m not really about everything you are. My creative needs and other believes might not be as extreme as yours so please don’t be disappointed when I branch out.

My point? All things considered. I am not going to lie and say Girls with Sharp Sticks was the book my feminist soul was crying out for because I’m not that person. I’m not saying that I’m some backwards git who thinks women should be in their place or anything like that. Not at all. Women should be able to do whatever women choose to do. Whether they choose to be stay-at-home moms or choose to be president, or anything in between. Women should have that right. I’m just not out there waving the feminist white flag of all things feminist. So, to scream that now? It would be fake and inauthentic.

However, I was, am and always will be a tom boy and an outcast. I’m just not that girly, girl, mousy kinda girl. I was ridiculed for it throughout school (we were also dirt poor, living with an angry drunk alcoholic, in an ultra-wealthy area) and no one stopped it. I was over 200lbs until my late 20s/early 30s, so there’s that. Not teachers, administrators, no one stopped it. Hell, my mother didn’t stop it until high school and even then? I skipped my senior year of high school just to make it stop. And by then the damage had been done. Because no one said anything.

In fact, I was often the one punished for their behavior. They/their families were powerful, privileged and filthy rich. So, I was the one everyone said… she’s so smart, bright, strong. She would be a leader in an alternative high school. That is when my mom finally woke up. Little late. But thanks.

So. Yeah. I may not be the ultra uber feminist? But, in this regard? I completely resonate with the rest of the story. Neither book was there for me when I was in high school but damn how I wish they were. It would have been hella more useful than 90210 and Saved by the Bell.

I Had My Concerns…

It took about 10% into Girls with Razor Hearts before all hell had broken loose. No. Seriously. Not even 10% in and if you didn’t know before? You are now SURE that Suzanne Collins is like… 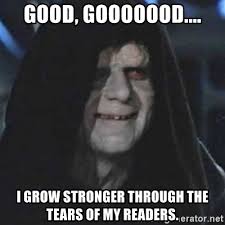 Despite this, red flags went up and, I did have my concerns as to where the plot was going to go.

Completely. Unfounded. I should have known better. The second Jackson showed up in Girls with Sharp Sticks I groaned so audibly I’m pretty sure it shook the world. And that was unfounded, too. Because Jackson is probably my favorite non-love interest, like ever. Let’s not forget that on page 350 of Girls with Sharp Sticks he shows up again and the first thing Mena tells him is, no we aren’t leaving because we have to find our girls and, oh by the way, Annalise is bleeding to death. So, they drag him, his busted leg and her to the lab.

But then for eight pages- and fair play- those are eight pages that made me violently ill and broke them and for fucks sake blew Jackson’s mind to smithereens- we never hear about Annalise.

And finally, I’m thinking– um, but WHAT THE EVER-LOVING MESS HAPPENED TO ANNALISE? She was just bleeding to death and I get you are all a hot wreck but uh… ANNALISE?! And it is Jackson at the bottom of page 358, of ALL of them that is all of us…

Jackson stands dazed, continuing to dart his eyes around the room. I think he might pass out. “We have to keep moving, ” he says. “I think your friend is bleeding to death.” He motions to Annalise

Yeah. No. High School Drama this isn’t. While the setting did allow for some additional social constructs to envelop, none of my concerns around teenage drama did. Plus, Jackson continuing his more removed role from the main plot allowed for the girls to really have to learn and navigate the real world on their own. Had Jackson played a major role by their side, it would have made the whole plot way too convenient.

So many connections had to be made between how Innovations Academy “raised” them and how girls were actually raised. How boys were raised to be entitled, which then turned them into the investors that bought them at Innovations. Plus, the added layer racism that Sydney faced. Jackson being there to explain all of these nuances to them would have made the story too surface, easy and simplistic. With the girls having each other to lean on, they had to dig deep and rely on each other and the few humans they met along the way.

That made things even more complicated. Winston Weeks, Leandra and the cliffhanger of Lennon Rose from the end of Girls with Sharp Sticks all come into play (but I won’t say how because of spoilers). Then there is the newly introduced hacker, Raven… a hacker with them? Mercy… I’ll let you marinate over that one until you can read Girls with Razor Hearts for yourself.

The cast of characters from their school all play a crucial role both as they learn how to deal with the real world and as they enact their mission to take down Innovations Academy.

Have no fear! When Jackson does pop in and out, he still has his one-liners that play off the girls with a brilliant quickness. Quips made for the highlight reel!

“Jesus,” he replies, running his hands through his hair. “Why are you always covered in blood?” he murmurs…

“Sydney had a bat,” she calls out to him. Jackson widens his eyes and turns from her to me.

…”Hope she swung for the fences.”

That’s our Jackson! Because I mean seriously. FFS.

HOLY CRAP! Finally, someone went there. These girls are fierce, but they aren’t JUST FIERCE IN THEIR WANT FOR REVENGE. They are fierce in their want to not be controlled by anyone. They are fierce in their belief in equality for everyone, they grow throughout the book to realize that violence is cyclical and that the answer is not for them to control the world. It is not up to them to just take out their rage on the world. And it isn’t just men that can be hateful and controlling.

Anyone and everyone are capable of manipulating anyone and everyone else’s anger and hate. The whole group wrestles within themselves and without outside influences on who to align with because even those that might want what they want, to take down Innovations? After that? What do they really want and how do they see these girls going forward? Are they appliances that can never be more than that to anyone? Do all men, or even all humans deserve to be put under their foot for control? Is it even their right to make these decisions?

Girls with Razor Hearts actually takes readers on the journey of balancing love and hate, being hurt and traumatized yet still finding a way to not judge everyone based on those that have torn you a part. Is an alignment in beliefs even enough to build trust? Will that keep you safe? You may agree with the outcome, but do you agree with the means of how to get there? What about the next step, what happens after that?

The girls go through so much growth throughout this book that it is extraordinary to witness and be apart of. And that doesn’t even touch on the events that cause these changes. There is still the brutality, nauseating and just mental mind-bending that I really thought a sequel could not continue. I won’t say it is as bile raising as Girl with Sharp Stick, on that one point. I mean that whole lab scene is just…. dayum. But it is damn close.

Bless Young for finally being the book that takes on the vigilante piece with force.

This series has been a week long revelation for me and I can’t imagine waiting a year for the next installment but I am most definitely here for it.

9 thoughts on “Girls With Razor Hearts, By Suzanne Young, Had Me Running Around Like There Were Fire Ants Up My Ass”