Skip to content
Ink in the Blood had me shook! Today, discusses a wide range of topics one week after its release.

Kim Smejkal (bio and website linked below) latest novel, Ink In the Blood released on February 11th and I was shook. I was thrilled to have the opportunity to send questions over for her to answer as it hit shelves. Discussing a wide range of topics, including the sequel that is due out next year (I have to wait how long??!), Smejkal opens up about her father’s influence, possible soundtracks for the duology and a goth fantasy sub-genre.

Take a gander and join the conversation. Then run, don’t walk and get ready for a dark and fantastical ride when you among the pages of Ink in the Blood, out now (links with further information at the end of the interview).

After reading Curse of the Divine, please check-out my latest interview with Kim Smejkal

1) Ink in the Blood is such a unique story. As an avid reader of YA and Adult Fantasy, I have not come across anything remotely close to it. Would you agree to that point and if so, did that excite you or make you nervous as it released into the world?

I definitely agree, and I’ve been both excited and nervous for months because of it! I set out to take risks with both writing style and content, and from the beginning I suspected it would be a polarizing book—that readers would either love Ink in the Blood with a fiery passion or…not. Thankfully, the risk seems to be paying off. People are responding with so much enthusiasm and love, it’s made all the anxiety worth it!

2) Personally, I love/think it is important that your bio says you write for young and not-so-young adults. This is often debated among everyone from readers to authors and publishers, around the YA category. Why did you feel the need to include that clarification in your bio?

As avid readers of YA lit, we know how deep and layered the stories can be, but I think a lot of people still hold a preconceived notion that YA is “less than.” This idea manages to be insulting to both young adults and adults who read YA! There are universal themes and lots of stories that transcend age (my favorite bookish example is The Little Prince). My target audience is young people and that’s something I will always be cognizant of, but that doesn’t mean adults can’t enjoy these books with the same zeal.

3) There is a wide opening for the sub-genre of goth-fantasy. Do you see Ink in the Blood fitting that sub-genre? If so, is that something you would like to continue writing?

Ooooo, is goth fantasy a thing? It should be! Ink in the Blood would be right at home there. As far as my future projects, I will continue to write dark fantasy until my stories run dry; that’s what I love to read and where my brain naturally goes. I have to blame (thank?) my father for this. He was reading me Brothers Grimm and Edgar Allen Poe when I was but a wee babe. ????

4) Can you spill (without spoilers) the tea on Curse of the Divine? Publication date? What readers might expect (generally speaking)?

Curse of the Divine is all set to hit shelves in February 2021. While the Ink in the Blood series is a duology, both are relative stand alones: you can enjoy one without reading the other, although you’ll get a better experience if you read them in order! Curse veers into a different world, quite literally, and follows Celia as she tries to defeat Diavala for good and save the Pague Doctor. I can’t say much about the plot because of spoilers, but two things I love about Curse is that the Plague Doctor has some point of view chapters (it was super fun to get inside his Riddlish head!), and there’s a new, scene-stealing villain for Celia to contend with, on top of all her other problems.

5) At some point over the summer I started fearing that authors would run out of unique, well done, flushed out magic systems- like the well would run dry. Thankfully, so far that has been proven completely off the mark.

I have to say, though, that your magic system and that in The Written by Ben Galley are two of the most unique to date, both dealing in tattoos.

Are you a tattoo aficionado, artist or been inspired by one? If not, how in the ever even did you think this one up and flush it out so thoroughly to make the buy-in so easy, making it so believable?

I’ve just always loved tattoos. I wrote Ink in the Blood for myself as a young adult, and I stuffed it full of things I was obsessed with, body art being high on the list. Using tattoos as the basis for the magic system also gave me the opportunity to explore themes of free will, body autonomy, and the power of art as a tool for rebellion. Even though tattoos are more mainstream now, there’s still a hint of anarchy there, and it lends itself so well to the world I created in Ink in the Blood. I don’t even remember making the conscious decision to incorporate tattoo magic into this story—Celia was just always a subversive inkling, she was always rebelling via her tattoos. In a lot of ways, this book’s magic system was easy for me to write because it was already there and I just needed to coax it out. 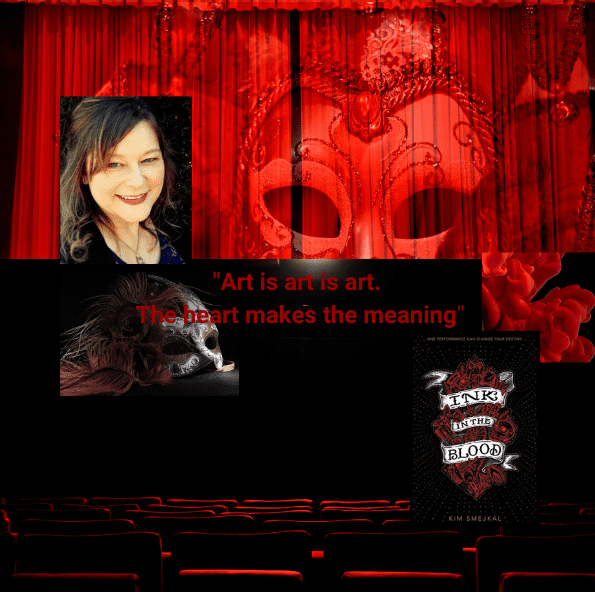 6) The tangible colors attached to ones sexual identification whether they are static or fluid is thoughtful (not quite sure that is the exact word I’m looking for). The execution feels very authentic. Can you elaborate on it?

Thank you! It’s a relatively small part of the world-building but one I took extreme care with. In the world of Ink in the Blood, tenors are flickering, complex, fluid auras that signal gender identity. An extension of soul, if you will. Pronouns in Ink (as “read” from someone’s tenor) are an art more than a science—a way of distilling something infinite into manageable language.

Basically, I wanted to create a world without a binary gender-system, where everyone is who they are without fear or judgment. I like the idea of dismantling gender prisons very much indeed, so I wrote it into existence!

7) Ok this one is going to come completely out of left field so forgive my indulgence. If this series was ever to become a movie or netflix series? I could completely see a My Chemical Romance soundtrack with Gerard being the concept/visual/comic/award winning artist that he is… if it that were to happen, do you think that would make a good fit? If not what would be your soundtrack?

I would perish if Ink was adapted to film or TV, but I would perish and then rise from the dead and then perish again if someone as rad as Gerard Way had any involvement with it. We can flail together if this miracle happens, right?

Yes. We would absolutely flail together!

But I have to add that Alt-J would absolutely have to be on the soundtrack as well, since this book was written on steady diet of their albums, An Awesome Wave and This Is All Yours.

Thanks so much for having me, Susan!

Thank you for taking the time to come by this corner of the world!

Kim Smejkal lives with her family on muse-satiating Vancouver Island, which means she’s often lost in the woods or wandering a beach. She writes dark fantasy for young adults and not-so-young adults, always with a touch of magic. Her debut novel, INK IN THE BLOOD, will release from HMH in early 2020, with a sequel to follow in 2021. She is represented by Daniel Lazar of Writers House.

3 thoughts on “Ink In The Blood Author, Kim Smejkal, Discusses The Inspiration Of Tattoos, A Father’s Dark Influence And Possible Soundtracks”