Skip to content
The Wolf of Oren-Yaro by K.S. Villoso was one of my most anticipated reads. Did it live up to my expectations? Yes. Was it for the reasons I expected. Absolutely not.

The Wolf of Oren-Yaro has been one of my most anticipated reads. Unlike another recent read, it definitely lived up to my expectations, just not for the reasons I expected. K.S.  Villoso’s new series gave all the vibes of this ruthless and take no prisoners kind of queen, but really that wasn’t the case. Even the first line would leave you to believe that Queen Talyien (Bitch Queen- literally because she is known as the female wolf) is of this personality:

They called me the Bitch Queen, the she-wolf, because I murdered a man and exiled my king the night before they crowned me.

And yes, she even has that reputation. But if there was one (and there literally might only be one) thing my father taught me that stuck with me? Perception is every thing.  It shouldn’t be. Perception is rarely truth. However usually that is how the world works. As we get to know the queen, we come to realize that her reputation isn’t her reality. Under all that hard-ass Armour? There is this really soft and flawed person. In my experience? That is true of a lot of people in the world. Not everyone. Sometimes under veneers of anger, toughness, bravado, there can be another level of anger, toughness, and bravado.

However, not in this case. And that makes Queen Talyien a complex and complicated character. In a book that is most definitely character driven? That is essential to keeping readers tethered to the story.

Ultimately her problem is what her father taught her. I can’t is an abomination of a thought. And it has cursed her to not give up. Ever. LIKE EVER.

Algebra Is Not Applicable To Life

I will die on that hill. The man in the first sentence? Unfortunately it was not her husband, Rayyel. Because that boy is some sort of torment on her heart. I relate. The only difference is my (unfortnately) X would never intentionally treat me like shit on a stick. He would love for us to be best friends. God help me. Truthfully, it would be easier if he did intentionally betray me because it is easier to be angry than this hell hole of depression. But anyway, Rayyel calls for reunion talks and she goes running.

I know this is a bad idea. I mean it is screaming bad idea. But for the love of her people, who by the way hate her, and the love of the husband who betrayed and left her five years before, she goes anyway. And.

During negotiations they are all attack by assassins of unknown origins and now Queen Talyien is stuck on some faraway, hostile planet. Add on the fact that Rayyel, has been captured and she, God help me WOMAN JUST STOP, decides to stay and try to rescue him. This leads me to the only applicable use of Algebra in real life… EVER.

And from there? It is just one bad decision after another. But you root for her and you want her to do the right thing. Except she keeps not doing the right thing. One. Because she wants it to work for him and two because she thinks working it out with him is best for her people. Kind of like people who stay together for the kids. Mom’s are always the first to willing to make all the sacrifices while the guys … ok maybe they don’t assassinate you, but they run off with the <insert real life situation here> and assassinate your heart.

Here’s the thing. As absolutely maddening and make no mistake, she is maddening, Queen Talyien can be? You see so much potential in her, if she can just hone her personality traits in the right direction. She is loves with all her heart, is fiercely passionate, dedicated, and doggedly determined to see things through. The problem those traits often blind her and she ends up making the wrong choices and pitching those tents for the wrong people and then making it worse by stubbornly standing by those choices. Rather than thinking, ok I tried to make that work and I almost got assassinated for it, so I’m going to find another man and another way to help my people, she decides to stay in a hostile environment and see it through.

It is like watching teenagers walk right into Jason’s machete in Friday the 13th, only you don’t care if they die. With Queen Talyien? YOU DAMN CARE. That is the brilliance in Villoso’s writing. For all of her bad choices? You can’t help but root for her and hope against hope that she will grow and change after each misstep. 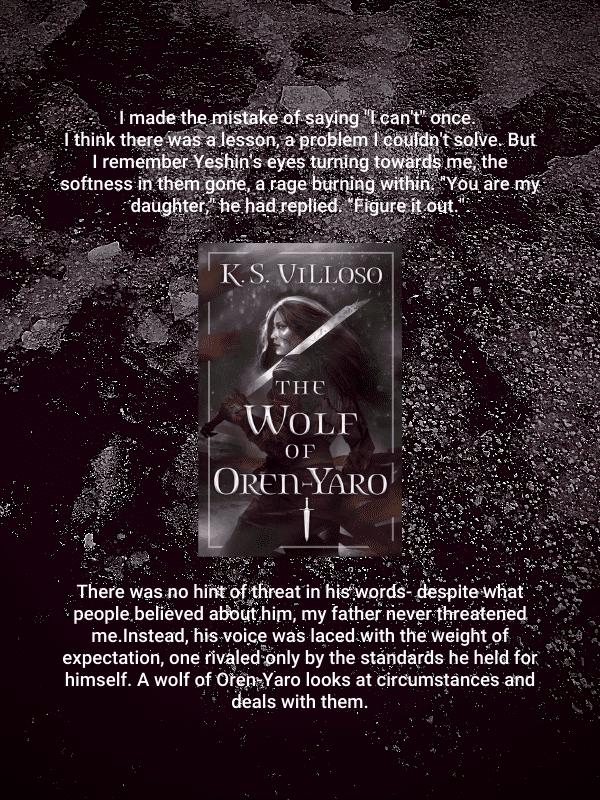 I don’t want to spoil anything so all I can say is it is a great ending. I do think there will be varying opinions on it. Either way, whether you like it or not? Whether you think it brings any redemption to actions that Queen Talyien takes along the way? I don’t think it will matter because this is a series. The bottom line is whether you agree with it or not, whether you like it or not? It is biting and intense enough to keep you going to book two. That is what matters. Personally, being this is a character driven series, I would like to think there will be change over time. Whether that is for better or worse? Only Villoso knows.

Villoso killed it in two ways here. At times I had to remind myself this was the first book in a series. After all, this was a character driven story. After Queen Talyien and Rayyel, there were well developed side characters.

She also does a fantastic job world building. While the physical descriptions brought it off the page and clearly in my mind. It goes beyond that. There was great depth given to each by providing a back story just like you would a character. By doing so, it really added another layer to what I would even consider exceptional world building.

Between the characters and the in-depth world buildings, the pace was never hindered. There wasn’t that “info-dump” feeling often found in the first book of a series. There are a lot of first books in a series that I let that slide because it is almost expected. With The Wolf of Oren-Yaro it wasn’t even something I had to say, yeah just get through this part and we are off to the races.

How Villoso interweaves the world-building, characters and action off-set that feeling of a first book info-dump. That isn’t an easy thing to accomplish and it made the structure/prose much easier to digest than most first books in a series.

6 thoughts on “The Wolf Of Oren-Yaro By K.S. Villoso Is A Character Driven Story With A Realistic Female Lead, Beautiful World Building And Break-Neck Pacing”