Beneath The Haunting Sea

Beyond the Shadowed Earth, releases today. It is a companion book to Beneath the Haunting Sea but not a sequel. Set in the same world and the villain that set-off the series of events in Beneath the Haunting Sea, Beyond The Shadowed Earth tells the story of Eda and the price you pay for getting everything you wanted. JoAnna Ruth Meyer set a clear directive in the level of hatred for the readers ability to hate Eda for how the actions she took at the beginning of Beneath The Haunting Sea.

Her ambition overtook right from wrong. She took something that was not meant to be hers and in doing so she made a dangerous pact with a god to become empress. Beyond the Shadowed Earth picks up almost a decade later with that pact, and her part of the world crumbling around her. And Eda determined to demand what is rightfully hers from the God that has betrayed her. 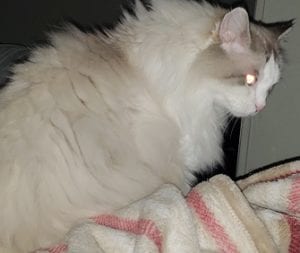 Liam would never let himself become a lush. It would cloud calculating nature.

Meyer continues to deliver her beautifully composed prose with a mythology flair that was well received in Beneath the Haunting Sea. She discusses this at length in the Q and A linked above. That rhythm and style plays into the the content and structure of Beyond the Shadowed Earth perfectly. It provides a perfect place for Eda’s character ARC and a haunting and frightening place for a God to interact with Eda at times, and then for some beautiful times of reflection and revelation, at others.

Just as Meyer’s style played so well into the plot and essential action sequences, character reflections, it also played beautifully into how the world was built. Much of the best of parts of Beneath the Haunting Sea was how brilliantly the world was built and I have to say the same about Beyond the Shadowed Earth. The world building was so specific and detailed and the credit has to go to how Meyer writes. There is vivid, painter way with-which Meyer writes. It is a very unique tone and quality that sets her work aside from others. Due to that, her world building is particularly brilliant, coming alive like jeweled tones and gems sewn onto a queens gown. It is almost blinding in its brilliance, really. 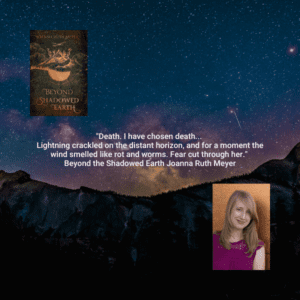 Thank you to Page Street Kids and NetGalley for an Arc in exchange for an honest review.

Will everyone be able to go on this redemption arc with Eda? I don’t know. More importantly, whether you are rooting for Eda to come around to the light or fail to a bloody end? You will be compelled by the plot and her story to read Beyond the Shadowed Earth. And considering the palatable hatred I had for Eda going into this book? That is saying quite a bit.

I don’t want to say more than Meyer said in the interview. It is not mine to say too much. But maybe it isn’t about whether or not you want her to be redeemed? Maybe it is about whether the author can spin a story web compelling enough that it doesn’t matter. It only matters that the reader wants to go for the ride. In Beyond the Shadowed Earth that is what Joanna Ruth Meyer has done.