Skip to content
Among high, epic and intense stories, Nikki Katz has provide and briskly paced fantasy with all the elements needed for a fantastic read in a briskly paced read.

BAND ON THE RUN!

Yep. I’m not Captain America on this one. And if you don’t get that reference? Because these characters deserve nothing less. They are and I am here for it

The King’s Questioner by Nikki Katz (Q and A) is released on January and what will set it apart is what it isn’t. So, let’s get that out of the way before moving on to what it is. What The Kings Questioner is not. It is not an epic, high fantasy that is intense and heavy-handed. This is, at its heart, a briskly paced, quick read. It is a breather between those epic, high-fantasy reads, and a much needed one, at that. Sometimes it is easy to forget how much all the intensity can take a toll of you don’t get a break in between.

The problem is, it is so hard to find the right-ones. Whether you want something smart, quirky and throws all the rules out the window like Fate of the Fallen, or you are looking for a story line that sticks to the rules but damn-it won’t melt your brain, it isn’t easy to find one that doesn’t get ridiculous. The King’s Questioner is here to save us all.

At 300, pages it gallops right along. There isn’t a ton of anything but just the right amount of everything. And that makes for a captivating read that isn’t going to slaughter you into a million pieces. Because as a reader, and I can only speak for myself, if I don’t stumble on to books like these? I’ll just keep going one after the other with Ninth House and There Will Come a Darkness and Wilder Girls and Allegedly and so forth until my head just explodes. Sometimes the sun does shine and these are the kinds of books that reminds us of that in between all the other ones that bludgeon us to death (which we completely ask for, no doubt).

Ok, ok… so what is The King’s Questioner? Hold on to your horses!

About That Band On The Run (Characters)

They are a bunch of loves. Kalen, Cirrus, Luna and a couple wanna-be pirates of sorts for good measure. Luna stuck between two boys, trying to keep them inline while getting a mission accomplished, the only one not affected by any magic. Bless her heart (literally, not sarcastically). That girl has so much to put up with and I just loved her from go. Kalen, the King’s Questioner, cursed with an ability to read memories. Mind you this is pretty much killing him and yet the King is just taking advantage of it and Cirrus the prince. A prince just trying to unlock the truth. This trio has jumped the castle to find the truth and destroy whatever has taken hold of the country before it is too late. Good luck not falling in love with the three of them.

Magic And The World

I put these together because they really go hand in hand and give the story an almost Zelda kind of feel. Now, gamers out there I wouldn’t go jumping up and down. I’m not saying this is a gamers story and those of you who don’t know Zelda from a hole in the ground, I am not saying you have to be a gamer to get it.

I’m just saying the way pieces of the magic tended to be in different places throughout their travels reminded me of Zelda (and I’m talking the first Zelda way back with the original Nintendo) when you had to go and talk with different people, barter with them and find things, unlock magical chests and then go to the next place. It was fun and simple and not like the current PS3 (4? 15? I don’t even know- I’m back to Captain America) where everything is coded and you need to buy a book to play the game. 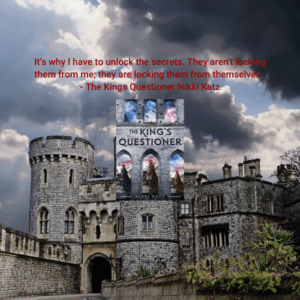 ARC provided by Swoon Reads in exchange for an honest review.

Within that the magic system makes sense and matches the different worlds. It is connected to Kalen’s abilities and everything makes sense. Is the setting and magic system flushed out like a 600 page high, epic fantasy? No. But again, that isn’t the point of The King’s Questioner. Don’t look for it. When you see a 300 page book, I don’t think your first thought should set expectations accordingly (IMO). Especially when this is, as it currently states, a stand alone book. Although, there is room at the end for more, and I would love to see it.

Oh, but yes! The secrets and agendas are embedded deep with this one. There is a twist of empathy for the rationales behind why. Typically it is easy to hate the evil doers and those with the hidden agendas. There is a clean line of black and white, good and evil when it comes to those that have set-up the secrets that are causing all the drama.

Not so much with this chess match. The reasons behind the lies and tales that have been spun come from a much different place and it makes it hard to outright hate the center of gravity around those that caused it. Now if there some that have decided to taken advantage of those secrets and actions that were taken so many years ago? That is easy to hate on and hate you will.

Overall The King’s Questioner is a book to take a deep breath and enjoy all the things you want out of a fantasy book in a lovable way. Enjoy it and go with it!

4 thoughts on “Political Intrigue, Secrets And A Brisk Pace Sets the Stage For Nikki Katz’ King’s Questioner Out 1/14”