Skip to content
This week's Can't Wait Wednesday is a debut novel by Alexis Henderson that centers around the occult of witches, one young woman and a dark truth burning within her soul.

At least my dark soul and shattered heart has been good for something. PHEEEEEEEEEEEEEW– all the dark magic, meddling Gods, prophesy tropes that rock, that author that spun it on its <quite literal> head, vampires, sucumbi, the occult, immoral creepy geniuses, (winkity, wink Kaz) brutal worlds where the only thing darker than the magic is the humor… I LOVE YOU ALL…! AND THANK THE SEVEN IT ISN’T STOPPING THIS YEAR… With that I think it is only fitting this week’s Can’t Wait Wednesday is a debut… 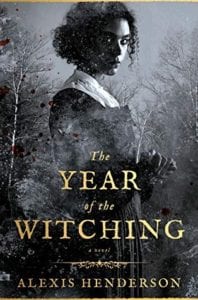 The Year Of The Witching By Alexis Henderson

The goodreads link is above and at the ABSOLUTE LEAST ADD IT NOW. But seriously. JUST PRE-ORDER IT (Links Below.)

Don’t even fight it.  It isn’t even worth the fight.

HEAD’S UP TO ACE: I am REALLY NOT a cover person but if you don’t want me to beg for a hard copy of an ARC… Don’t create such dark perfection.

The Year of the Witching Synopsis:

A young woman living in a rigid, puritanical society discovers dark powers within herself, with terrifying and far-reaching consequences, in this stunning, feminist fantasy debut.