Skip to content
Chosen, the sequel to Slayer by Kiersten White is coming out in January and I am here for it! In preparation of my ARC book review of Chosen (Slayer #2), I have put out my review of Slayer. Get out your stakes!

Slayer, Kiersten White’s first installment in the Buffyverse, Slayer series was easily going to go one of two ways for me, cringe worthy or HELL-YES! White had me at

I try not to take advantage, but if they’re going to treat me like the castle pet just because I’m not all with the stabby-stab, at least I should get some perks.

It is a very fine line that White and also, Diana Peterfreund (Clue Series- In the Hall With the Knife) are walking between expanding universes with a cult following, and writing fanfiction. As it stands, both have done so masterfully.

Buffy. The Struggle Is Real.

Slayer begins where Buffy left, erm, does what she does best and went rogue. Tearing the entire system of watchers and slayers in half when she destroyed the Seed of Wonder fighting the biggest of the big bads, thereby eradicating the world of magic.

Without magic left, and a slew of slayers, and watchers destroyed in its wake, chaos ensued. Thus leaving the watchers and council to wither away to nannies, fight-club wannabes and longing history scholars, among other things.

Those that are far enough from the fallout’s epicenter escaped harm, taking refuge in an English castle, where they remain, including the descendents of Buffy’s watcher. Here, they salvage what is left of their history, while tracking down any remaining threats. In the face of Buffy’s rouge behavior, they have done their best- and no one has missed that fact.

Artemis and Athena (Nina) are thick as thieves, as twins will be. However, in Slayer, their mother has raised them in ways to cause Nina to feel not just dismissed, but outright hated. Artemis was saved in a fire while Nina was left behind, chosen to train as a watcher while Nina had to train as a healer. Their mother has never made her feelings hidden as to who her favorite was.

However, Nina is holding secrets of her own. Even her twin sister doesn’t know that Nina has sensed a change within her. She is starting to feel other senses that are hard to dismiss. 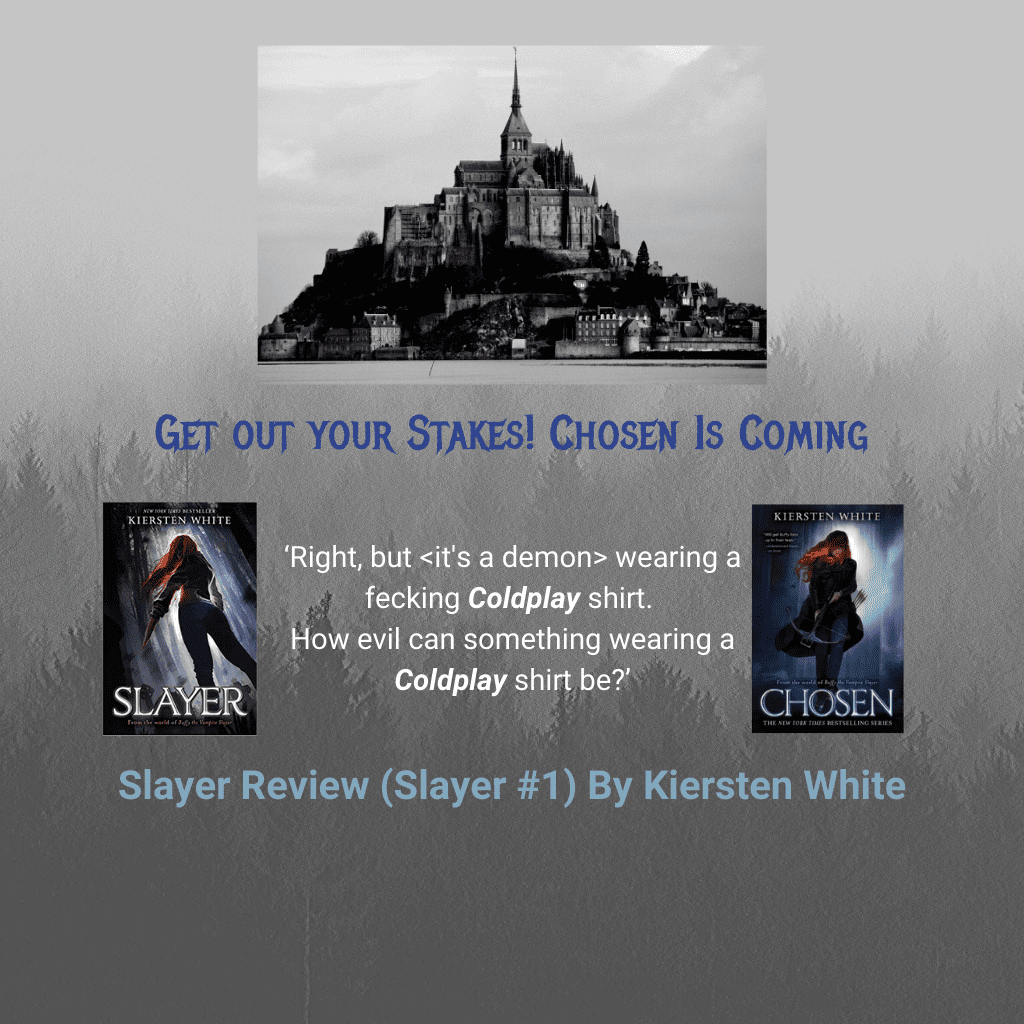 And so, when a hellhound descends on the castle from a portal that is no longer supposed to exist? It is Nina, not Artemis that snaps its neck and saves them all. Yet, all anyone can see is the dynamic their mother raised.

Nina is the week twin, Artemis is the protector. This leaves everyone in more shock about Nina’s ability to dispatch of the hellhound than the fact that a hellhound just exploded through a magical portal. Because, uh, hey! Magical portals aren’t supposed to exist anymore.

Once alone, Nina can no longer hide the changes she has been feeling from Artemis. She tells her everything. A strike of lightning that hit Nina just as the Seed of Wonder was destroyed, taking magic from the world. That moment her, her potential as a Slayer was fulfilled. And into every generation a Slayer was born.

How I Was Slayed #Rimshot

Slayer is the perfect balance of reminiscent without making me want to scream aw come on, already. Hearing the sir-name Wyndam-Pryce made me sad and also ticked me off that he was relegated to that failed watcher that ended up working for a vampire detective agency. While, of course, Giles was Giles. Then again, you have to take that from someone who watched Angel first and then backtracked into Buffy. So Angel was always first in my heart and when Wesley died in the last episode of Angel I sobbed uncontrollably.

Just having a reference to Angel, the TV show or otherwise was a happy surprise. I’m kind of wondering if there might not be an opening to some kind of appearance. Lord knows the ending of Angel was so open ended it left us all begging for a movie or something. I know I’m reaching, but a girl can dream.

The story behind Buffy setting the world on fire was well done in bits and pieces. The disdain was palatable but not overdone and the descendents of different parts of the universe crashing together was very well thought out. Everything made sense. And while White built on the universe Joss Whedon created a cult around, I never noticed a canical rule (and I’m one to find canical rules and scream righteous indignation over them- just see vampires glisteing and Batman killing for examples) being blatantly busted.

This is all pulled together by White’s narration. Whether taking from the familiar one-liners Buffy was known for or her own brand of humor, White nailed it, in Slayer. Then, when the story turned on its head? The action, the guts, the gore and the fighting hit? It was there in all the bloody yuck needed. The heartfelt moments between Artemis and Nina (more on that below)? They were beautiful.

Nina’s character was drawn on deftly built through her point of view. Each character, the plot and world was seen through Nina’s eyes and that narration was interwoven with dynamic emotions, sarcasm and wit that the Buffyverse was known for. Yet, White grew it and put her own twist on it, as well. For those who are familiar with her previous work, you will pick up on some of her twists. For those who are not? I hope you will see this as a reason to go back and read her other works.

I loved them! Each and every one of them. Well except <insert spoilers of evil doers with hidden agendas>. But I’m going to focus on a couple in particular because, I could just eat them like chocolate chip morsels, I could. Rhys and Cillian. I just couldn’t stand their hot rolling authentic mess of themselves. I ATE THEM UP.

Their relationship (YEAH I KNOW SHUT UP). Their dialogue. The authenticity of it all. I mean in the middle of the hellhound that shouldn’t even have existed, Nina who shouldn’t have been able to kill it, killing it? There is Cillian and Rhys. Cillian who knows feck all about feck nothing looking at Rhys like WHAT THE ACTUAL FECK?!

Vampires? Cillian squeaks as he turns to Rhys. “Those are real. Vampires are real. I thought- I knew about magic, obviously, but I thought you were just some divvy cult. You never mentioned vampires.” That seems like pretty critical information you could have given me sometime in the year we’ve been dating. ‘Hey, Cillian, you’ve got nice lips and also did you know there are demons and vampires in the world?

I mean it isn’t even that he’s angry. It is more like shock… like what what else are you hiding in your skivvies? A pair of ancient cerberus or something? Are you an ancient cerberus? Because if were are going to go any further I think I have a right to know what I’m making out with, here. It is just like White nails it.

Artemis and Nina’s relationship is beyond heartbreaking. They are a beating heart that are forced on to two divergent paths. As much as they love and need each other? They know that what is happening to Nina will change how their relationship works forever. Artemis’ entire life was premised on making the world safe for Nina and now Nina is running around saving the world. It is heartfelt and wrenching.

Dialogue… There’s Nothing Without Dialogue

Everything from the start of this post leads to this final section. Whether Slayer was cringe worthy or epic? If it took too much from the Buffyverse or not? Did the characters and their relationships work? All of it came down to the dialogue. And it was brilliant.

I don’t want to rehash a lot of what I said before, because it is covered. From the relationships between each character, to their reactions to the absurdity of the situations they find themselves in, or the new world order they didn’t know existed? The verbiage never ceased to make me laugh out loud.

But it wasn’t all. As noted above, it was also thought provoking. It resonated. This was no more true than with Artemis and Nina. Their conversations are so fragile. Both have some much love to give but are still so defensive as their character arcs change throughout the story. Nina’s realization that she is a slayer is such a jarring shift that it is painful to read their words, feel the tension and mourn the loss of the bond they once felt. And it is written through their conversations and actions with precision.

One last thing– Coldplay. Oh Coldplay. I can’t say how much I appreciated all the Coldplay humor. I have no shame in my love for Coldplay (although like much music I haven’t kept track of them as of recently). But I have loved them from when Shiver was just a little single right through seeing them at Madison Square Garden. And I beamed at all the Coldplay jokes. Hence, the quote in the graphic. Thank you, Kiersten White, for that.