Goodreads and Pre-Order Links In Description Below

So way back when I first ran into In the Hall with the Knife by Diana Peterfreund on Edelweiss, I also stumbled in to Blood Countess (RUN DON’T WALK TO GOODREADS AND ADD IT TO YOUR SHELVES).  And geeked out AGAIN. Abrams must think I’m some kinda loser geek- not they are wrong, really, but beside the point.
Anywho, I’ve been waiting for what feels like FOREVER to get this

Authored by Lana Popovic Harper, who previously penned the Hibiscus Daughter Series. This is sure to be an exercise in making reading a combat sport!
Before showing you the bloody lovely cover and all the information needed, let me take a minute to thank Abrams for listing me as an ARC recipient once they are ready to go! 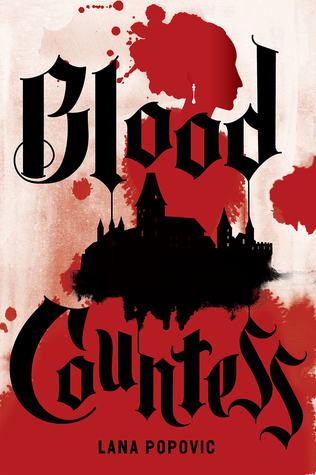 In 17th century Hungary, Anna Darvulia has just begun working as a scullery maid for the young and glamorous Countess Elizabeth Báthory. When Elizabeth takes a liking to Anna, she’s vaulted to the dream role of chambermaid, a far cry from the filthy servants’ quarters below.
She receives wages generous enough to provide for her family, and the Countess begins to groom Anna as her friend and confidante. It’s not long before Anna falls completely under the Countess’s spell—and the Countess takes full advantage.
Isolated from her former friends, family, and fiancé, Anna realizes she’s not a friend but a prisoner of the increasingly cruel Elizabeth. Then come the murders, and Anna knows it’s only a matter of time before the Blood Countess turns on her, too