Starting with Elizabeth Lim back during the Summer Fling, I have had numerous reasons for requesting the opportunity to interview an author. I can honestly say that none of those reasons have never included the following thought process:
Me: Opens up author’s webpage.
Me: Kicks around said webpage to get an idea of what the author is about.
Me: … is R.J. Barker’s second series… previously wrote the Wounded Kingdom Series… lives in Leeds, owns lots of books, lives with his wife, son and questionable taxidermy. He read whatever he could… WAIT WHAT?
Yeah. That sealed the fate on this interview. And bless Orbit and R.J. Barker for agreeing! While my unending curiosity might have brought me to request the interview, the end result exceeded far more than any of those expectations.
Welcome to the mind and world of R.J. Barker, author of The Bone Ships (Book 1 in the Tide Child Trilogy). It is released 9/24 via Orbit publishing.

I’m afraid my answer for this might not be very helpful. I’m a very unconscious person when it comes to writing – in that I tend to just sit and write and that’s how I find out what happens in the book. And luckily for me that generally ends up reasonably close to what you get in the final book (sort of). So when people ask ‘what have you learned’ I tend to scratch my head and just say ‘erm, stuff?’. But I am, of course, learning all the time,  both from the comments provided by my editor and the things readers say. They all go into my head and sort of drop down the back of the sofa in my mind, but they are there even if I can’t give you any definite answers about them.
I’m also not someone who likes to look back or to think too much about, well, anything really. I suppose that I can say the idea you can’t please everyone with your work, is stronger than it was. People will find what they want to in what you write and that’s great (even if it means they don’t like what you do). Once a book is done and gone it’s out of my control really, so I can only write something that makes me happy. I kind of thought that when I started writing but I feel surer about it being right now. Right for me, anyway.

Gosh, that’s hard. The Wounded Kingdom books are a pretty snappy, you’re straight in there and the world is an easy one for the reader to understand, nearly everything in it is going to be reasonably familiar to fantasy readers as it’s set in the sort of 10thc European fantasy world that crops up a lot. 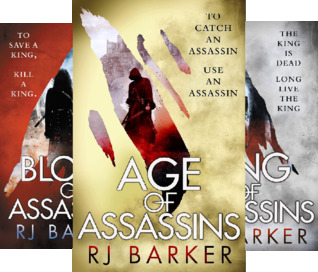 The Bone Ships is something very different, less familiar, more complex in its world building, more involved in its language and more deliberate in its pacing as I set up all the pieces I’ll need to tell the story of Joron and Meas over three books. So they kind of exist at opposite ends of the story telling spectrum, and I imagine going from one to the other might be a bit of a surprise.
But at the same time It deals with a lot of the same things that interest me: the dynamics of power, friendship, forgiveness, class, and why people do the things they do. It’s about finding a place to belong and a surrogate family. And again, there’s no ‘bad guy’ as such. The darkness comes from society and people’s inability, or unwillingness, to change things that are manifestly unfair or cruel. Then, in Meas we have another very capable older woman like Merela from the Wounded Kingdom, which harks back to one of my formative influences as a writer, C.J. Cherryh’s ‘Chronicles of Morgaine’.

I love the sea and I love reading about the sea, Patrick O Brian and C.S. Forester are big favourites of mine. I’ve always wanted to write about the sea, because I love it and because it doesn’t seem to be something used quite as much in fantasy. Then the creation of the world was really pretty prosaic, quite often you arrive at a thing by taking something that already exists (big sailing ships) then removing something important (in this case wood) and just thinking, “how else could this thing exist?” Because neolithic people often used horn or antler or bone in tools that seemed like a way to go, and then you get to thinking about the mechanics of it and that the bottom of a ship needs to be smooth, so that led to the idea of rib bones running the length of the bottom of the ship. From there you end up thinking about how big a creature would have to be to supply those bones, and that’s really the formation of the world right there.
Then on the other hand I’d been thinking about power and the way our societies often seem to ‘protect’ women because without women, there are no children. One man can father lots of babies, so men are actually a cheap resource in that way. You can afford to throw them away in wars cos you don’t need that many of them to keep a society going, but you do need more women. And I thought that was a power dynamic that can easily be turned on its head, so that’s how the Hundred Isles matriarchy and the idea of the Bern came about. Women’s power is gained through fertility, which isn’t revolutionary, but in this society that power is absolute.

It’s less taxidermy as sort of just odd things that we love. I don’t think it’s too outrageous to say that both my wife and I are slightly odd people and we love quite odd things. And before I sold a book and we had very little money we used to pass this antiques ship that had the most terrible stuffed foxes head in the window, and it was there FOR YEARS. Every time we passed it we’d laugh and then be a bit sad because quite clearly no one loved it.
So when we got married we bought him as a wedding present to ourselves (and also an otter head) and had them at our wedding so everyone remembers them and then people would get in touch when they saw really odd bits of taxidermy and it sort of snowballed. Though now we probably don’t have enough room for any more. Probably…

Tombland by C.J. Sansom. It’s one of a series of historical mysteries set between the reign of Henry VIII and Elizabeth I following the Hunchbacked lawyer Matthew Shardlake. It’s an astounding and beautiful book. But all of Sansom’s Shardlake books are.

Oh gosh, I was in loads of bands with loads of different influences but most of them were very bad. The only really good one I was in was late 90’s early 00’s and we took a lot of influences from Grunge and American power pop like the The Posies and Matthew Sweet. We never got anywhere but we had a lot of fun.
I always have some sort of noise on in the background when I write, sometimes music, sometimes just the television but it doesn’t really matter what it is cos I don’t really notice it once I’m writing. I’ve been listening to a lot of Cult of Luna lately and  Wovenhand but my tastes are really eclectic so a lot of the time I’ll just have a huge mixture of stuff on shuffle.

I am going to go slightly to the side of this question (sorry!). I always told myself I would never write about dragons cos the image of what “a dragon” is, in many way, is so strong. It flies, it breathes fire and it felt really constraining. A dragon is what it is and though I call the ‘Keyshan’s in The Bone Ships dragons I’m not entirely sure that’s what they are. It’s a bit like the way Girton and Merela in The Wounded Kingdom were based on Ninja but I could never call them that because people have such a strong idea of what a Ninja is that it interferes with their image of the character.
But I think we love more than the core idea of dragons, and while the idea of dragon is very strong it’s also incredibly malleable at the same time (Falkor, from the Neverending story is an incredibly un-dragony dragon in many ways, for instance.) You can say ‘this is a dragon’ and people will accept it.
But I think that really what we love is big dangerous things, and they serve as a reminder to us that nature is this huge and powerful force that we can’t control. And while in many ways the keyshan’s are not dragons in the traditional sense: they don’t fly, they don’t breathe fire, they are not reptilian. They very much ARE dragons in the sense of them being a force of nature, something huge and strange and unstoppable.
When I wrote The Bone Ships I was thinking more about kaiju than dragons really (though there’s a good argument for them being similar), something vast and something almost beyond our understanding.  I think it’s that sense of awe that matters, I think that’s what people are often looking for when you say ‘dragon’.

RJ Barker lives in Leeds with his wife, son and a collection of questionable taxidermy, odd art, scary music and more books than they have room for. He grew up reading whatever he could get his hands on, and has always been ‘that one with the book in his pocket’. Having played in a rock band before deciding he was a rubbish musician, RJ returned to his first love, fiction, to find he is rather better at that. As well as his debut epic fantasy novel, AGE OF ASSASSINS, RJ has written short stories and historical scripts which have been performed across the country. He has the sort of flowing locks any cavalier would be proud of.