I don’t ever, or maybe rarely if ever post rants because but why. I mean I don’t know that anyone really wants to hear my opinions on much of anything. So why. But this has been sticking in my head after an author mentioned it to me over a year ago and once you see it, it is like it can’t be unseen.

And now over a year later, I’m about to erupt like Twitter with the end of the Nevernight Chronicles (damn it Kristoff leave me ALONE).

Somewhere along the line death became a suggestion.  A possibility. A temporary state of affairs. I’m not sure how, where or when that happened but make no mistake, it has happened.

Ok. Not all the time. But enough. It isn’t just one book or two books. In the past year or so I can think of about six or more books where death was not imminent, the patient was not on life support but DEAD.

Let me repeat this.

And then suddenly, they were not dead. They were very much alive.

Miraculously they were brought back to life. Whether they were saved by magic, a deal was struck, a millennia-long constitution between forces was struck that you know is going to bite someone somewhere down the line, someone is resurrected or well you get the point…
It was like the Grim Reaper became a sidekick.

Stage Manager: Someone call in the Grim Reaper! We need him to stage left!

Instead of being this menacing be-all, end-all thing. The Grim Reaper was a prop to bring in the drama; a gag reel, a spoof. HEY! That sucks that, that character is dead, huh? Are you crying yet? Are you in the fetal position? Did I rip your heart out and stomp on it? Yeah. I wrote the shit out of it, didn’t I?

FOOLED YOU! THEY AREN’T DEAD!

There are a couple of things I want to make really clear before I move on.

1.This is NOT an attack on anyone.

2. If you reread that paragraph above. The key. The big key? It really doesn’t matter whether you kill or fake kill anyone if you don’t write the shit out of it. No one is going to care either way. Of all the books I can think of off the top of my head that fit the context of this post. I REALLY LIKE to ABSOLUTELY LOVE THEM. I really have to love or hate (and truthfully if I don’t like to hate a book, I’m probably not going to take the time to write about it because someone else probably already has taken up the gauntlet) a book, or anything really, to put this kind of effort into discussing it.

3. If I’ve taken the time to do something like this then it is probably because I really think it is worth the time. And if the book isn’t fantastic? No one is going to give a shit either way what you do or don’t do with the characters.

Throw them off a cliff, chop off their heads, give them nine lives, and resurrect them as a four-headed moose-dog. No one is going to care if they aren’t completely invested in the plot and the characters.

Does it suck that this character- usually this huge main, important character is going to die? WELL YEAH. Is it bleeding me dry? TAKE ALL MY BLOOD, BLEED ME DRY? YES, YOU VAMPIRE AUTHOR.

But good on you for the bravery to… oh damn they are alive. <grumbles>

DO BETTER- The Grim Reaper has earned it.

4. This thorn in my side has yet to make me hate a book, DNF a book or really even not like a book. But it does aggravate me because when I’m really invested in a story? It is like I can see it coming and I start pleading with the story—don’t do it, don’t do it, PLEASE DON’T DO IT.

Maybe we need to revisit the definition of the word dead:

Death. Is. Not. A. Temporary. State. Of. Affairs. And when you make it one? You defeat your amazing work. You undo it. The drama, the heart-wrenching dialogue, the climax, and the consequence of actions. Everything you bled into the story and dragged readers through (which is what we want… to be dragged through the mire with your characters and words and the mess of plot) … to have it undone by lack of consequence. The ultimate consequence-> death.

Ok. That was depressing.
Are there allowable exceptions? Eh. I don’t know if I would call them exceptions but plot deviations/devices? Yes. I do read fantasy/sci-fi. So, before people nail me to a cross let’s run through them and yes, I can amend this at any time.

a. The important and essential caveat here is that it must be built into the plot. This isn’t some sudden plot twist. This is apart of world-building.

b. I would also include superheroes under this category.

a. Truthfully, I don’t even think these count but I’m listing it just in case. Zombies aren’t alive. They are undead. Secondly, even if you wanted to go the long way about this. You take them out at the brain, and they don’t get to come back. So, no.

Unless you are a very popular character on a certain zombie show that deviates from the comics and goes for a really cheap ploy and you find yourself at the bottom of the dumpster. SO NOT COOL WALKING DEAD. SO LAZY NOT COOL. 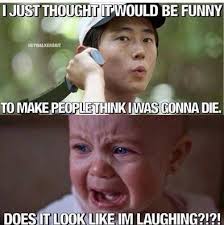 But that’s typical crappy TV tactics which deserve its own post for another day… except they didn’t let me move on, now did they?

b. Vampires are technically dead. I don’t even think it is technically. They are dead. DEAD DEAD DEAD. But fine. If you want to have this argument, then I can have it. The most popular ways to “kill” a vampire: Sun- DON’T EVEN DO IT- THEY BURN IN THE SUN-, a cross, a stake to the heart, starvation (lack of blood) and I believe decapitation.

a. This is another one that I think goes without saying but I’m going to say it for my sanity. With these genres, you know what you are walking into. Obviously, you have ghosts and souls and whatnot crossing dimensions and stuff. So, you get what you get. You are in for the ride or not. It is two different breeds of cat.

a. Truth be told, even this one is getting hard to pull off, but it can work. You think someone is dead but either they fake their death or there is a twin etc… Either readers know this from the get-go or there is a reveal where they find out along with the other characters and everyone is standing around looking at each other like WHAT EVEN IN THE FUCK JUST HAPPENED? But it has to be done right and well, or ick.

I’ve poured over this a bit and I can’t think of any specific magic systems that were built with the right of reincarnation that was worked in from the beginning. And even if it did, I think you would be taking away the consequence of death right from the beginning unless using said magic had significant consequences to the mage.

ANNNNNND that’s my story and I’m sticking to it… unless I should think of anything else or if anyone reminds me of anything I’m not thinking of… then I will properly credit said people as appropriate, edit and/or rip down the whole damn thing!

Till death do us part… and this time… I MEAN IT…

I hope that people will pipe up and either tell me I’ve lost my mind and they love instances where people are brought back from death (not the brink of death) or agree.

Or maybe there are more examples of the dead rising that worked, or failed epically that you want to throw into the mix?