The Hive by Barry Lyga and Morgan Baden is an urgent warning. Take Twitter’s mob mentality and public shaming are put it in the hands of the government. Especially the current government. That is a scary thought.
The main character, Cassie has just lost her Dad who is a professor with some hidden secrets that others might want to get a hold of (give her a superpower and you have the makings of a superhero, but I digress). Meanwhile, Cassie just wants to fit in with a clique at school. She posts a joke online that is of questionable taste and it catches the attention of “The Hive.” 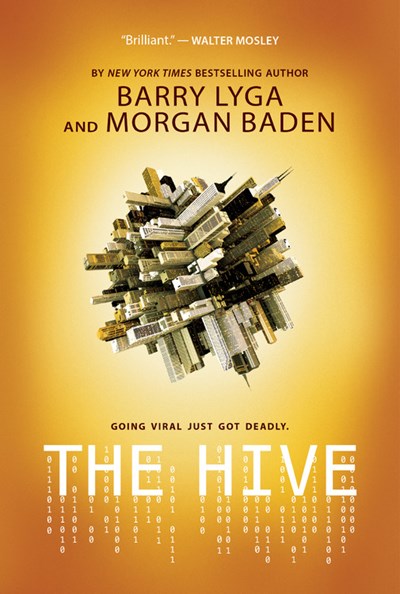 Thank you Hachette Books, Kids Can Press and Edelweiss for an ARC in exchange for an honest review.

The Hive is basically a state sponsored shaming mob. Here’s the catch. They don’t just create a mob mentality that jumps you online. Oh hell no. They come for you in person. Think flash mobs but with a sinister agenda.
The Hive’s message is a timely one. The ramifications of what you do online follow you your entire life. Social media platforms have given so many the right of outrage because it is easier to do and say things online, they just wouldn’t in person. But with the might of the government behind you? Then it is a whole new ballgame. You would not just say these things but the jump to action, violence and destruction of lives becomes tenfold.
What I’m about to say, unfortunately, is the second time I’ve said this, this week. The delivery of this important message is where The Hive loses me. Now to be clear, this review hasn’t torn me up nearly as much as UNpregnant (Review). One, because that is another level of importance. Two, because this is more about structure than about humor and being outlandish.
The Hive has a huge pacing problem. Most of this is due to jargon. There were times that as much as I wanted to stick with the plot because I truly did find it interesting, I found myself skimming through it. There was just SO MUCH technical jargon. It became way too much.
Second, it should have spread out the climax and solution better. All that time in the middle of the book that dredged on with both the plot and with the jargon that dragged it along? The solution basically came in the last 10% of the book. It was incredibly rushed and not entirely satisfying. If you are going to use that much jargon and make things that incredibly technical? You can hardly expect me to buy-in to it being solved that quickly. And by teenagers.

And ok this is probably nit-picky but can I cringe at that tagline? ICK.

I do hope the Hive is a spark of more novels along these lines. Social media and platforms aren’t going anywhere. They will become more ingrained in our lives, if anything. With better delivery The Hive could have been a dystopian book that, like The Handmaid’s Tale, would have been a warning of what the not-so-distant future could be. Publishers and authors should look at it and hopefully improve on its premise.