This meme is hosted at Wishful Endings, to spotlight and discuss the books we’re excited about that we have yet to read. Generally they’re books that have yet to be released. It’s based on Waiting on Wednesday, hosted by the fabulous Jill at Breaking the Spine. If you’re continuing with WOW, feel free to link those up as well! Find out more here.
To say I have been waiting for Eight Will Fall for just under a year would be a literal fact. By the time it is released? It will be over a year. It was completely accidental that I was on twitter when it was announced (I couldn’t even tell you who I was following that retweeted it) that the book had been sold. I read the blurb and flipped. I had just started blogging and had no idea how any of it worked. Lord knows I’m still learning.
Living by the rule that it is better to respectfully ask than to not, because why miss out on something, I found Sarah Harian’s website and reached out. I had no idea that it would be many moons until it saw the light of day.
Angel of mercy and patience that she is, she kindly entertained my complete idiocy and explained how publishing works.
After securing an ARC through the publicist at Henry Holt, I wanted to let her know, never really expecting her to remember me. However all these many moons later, she did.
I can’t wait to not only dive in myself, but for the world to get a chance, as well. See the details below, including the Goodreads Link to add it to your shelves! 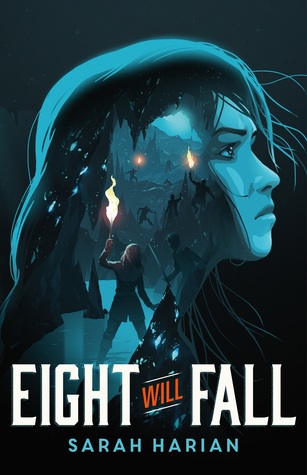 Release Date:  November 26, 2019
Publisher: Henry Holt
Synopsis:
In a land where magic is outlawed, eight criminals led by seventeen-year-old Larkin are sent on a mission to kill an ancient evil that plagues their kingdom. Descending into an underground realm full of unspeakable horrors, Larkin and her party must use their forbidden magic to survive what lies in wait, teeth sharp and jaws deadly.
As she fights for her life, Larkin finds a light in Amias, a fellow outlaw with a notorious past. Soon Larkin and Amias realize their fates are entwined. The eight of them were chosen for a reason.
But as the dangers multiply and her band of felons are picked off one by one, Larkin must confront a terrible truth: They were never meant to return.
Sarah Harian crafts a thrilling, high-octane fantasy adventure that explores the often-thin line between light and darkness, good and evil.