Ok this wasn’t as difficult as I thought. Go ahead and tell me number four is a stretch but I’m sticking to it. It is my blog and so my rules win. :p

Released: 2014
Synopsis:
“Deadly Class is a solid read for those who want a combination of Mark Millar’s Wanted and Harry Potter with Garth Ennis’s (Preacher) style.” – Library Journal (Starred)
“A good start to a wicked series.” — Booklist
It’s 1987. Marcus Lopez hates school. His grades suck. The jocks are hassling his friends. He can’t focus in class. But the jocks are the children of Joseph Stalin’s top assassin, the teachers are members of an ancient league of assassins, the class he’s failing is “Dismemberment 101,” and his crush has a double-digit body count. Welcome to the most brutal high school on earth, where the world’s top crime families send the next generation of assassins to be trained. Murder is an art. Killing is a craft. At Kings Dominion School for the Deadly Arts, the dagger in your back isn’t always metaphorical.
Collecting the first arc of the most critically acclaimed new series of 2014, by writer Rick Remender (Black Science, Fear Agent) and rising star artist Wesley Craig (Batman).

2. Speaking of graphic novels… Hello Cha-Cha and Hazel! Two of the most loveable, bungling assassins like, well ever! Sent by the ever evil, Commission that must keep the timeline and apocalypse in check at all cost, they can’t get anything right. Yes there were changes from the graphic novel (#5 having his head turn into a goldfish was just not going to work on the tv screen) but come on– it went damn well, and I for one am psyched for season two… for your consideration… I give you the 2008 Eisner Award Winning Umbrella Academy from Gerard Way (while I read started reading this way before the TV show, I will admit to seeking it out because My Chemical Romance broke up in 2013 and that broke me).

Released: 2008
Synopsis:
In an inexplicable worldwide event, forty-three extraordinary children were spontaneously born to women who’d previously shown no signs of pregnancy. Millionaire inventor Reginald Hargreeves adopted seven of the children; when asked why, his only explanation was, “To save the world.”
These seven children form the Umbrella Academy, a dysfunctional family of superheroes with bizarre powers. Their first adventure at the age of ten pits them against an erratic and deadly Eiffel Tower, piloted by the fearsome zombie-robot Gustave Eiffel. Nearly a decade later, the team disbands, but when Hargreeves unexpectedly dies, these disgruntled siblings reunite just in time to save the world once again.
• This volume collects the first six-issue series, as well as out-of-print short stories and an expanded sketchbook section featuring work by Gabriel Bá, James Jean, and Gerard Way.

3. Oh well yeah duh. HI! Unlike the two loveable, bumbling assassins listed above, Dunyaha Lazareva the White Blade comes for Inej.  She trained in Ahmrat Jen and is hired by Peka Rollins to come after Inej. She also has some delusional stake on the Ravkan throne. B… I mean witch. But of course… Inej can handle herself…

Released: 2016
Synopsis:
Crooked Kingdom: the highly anticipated sequel to Leigh Bardugo’s thrilling #1 New York Times-bestselling Six of Crows.
Kaz Brekker and his crew have just pulled off a heist so daring even they didn’t think they’d survive. But instead of divvying up a fat reward, they’re right back to fighting for their lives. Double-crossed and badly weakened, the crew is low on resources, allies, and hope. As powerful forces from around the world descend on Ketterdam to root out the secrets of the dangerous drug known as jurda parem, old rivals and new enemies emerge to challenge Kaz’s cunning and test the team’s fragile loyalties. A war will be waged on the city’s dark and twisting streets—a battle for revenge and redemption that will decide the fate of the Grisha world.

4. Ok. Fine. Maybe I’m stretching this but I say they are equal opportunity assassins. pfffft. They kill people. Randomly. They don’t enjoy it. They don’t want to do it. Ok, the ones that are best at it. The morally correct scythes. The ones that should be in the Scythedom. Yeah, not you Soddard.
Anyhow, someone has to do it. Bring on Scythe. 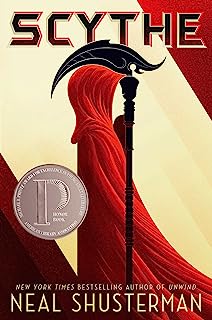 Released: 2016
Synopsis:
Two teens must learn the “art of killing” in this Printz Honor–winning book, the first in a chilling new series from Neal Shusterman, author of the New York Times bestselling Unwind dystology.
A world with no hunger, no disease, no war, no misery: humanity has conquered all those things, and has even conquered death. Now Scythes are the only ones who can end life—and they are commanded to do so, in order to keep the size of the population under control.
Citra and Rowan are chosen to apprentice to a scythe—a role that neither wants. These teens must master the “art” of taking life, knowing that the consequence of failure could mean losing their own.
Scythe is the first novel of a thrilling new series by National Book Award–winning author Neal Shusterman in which Citra and Rowan learn that a perfect world comes only with a heavy price.
5. No. I haven’t read it. I haven’t read Court of Thorn and Roses, either. Here is an author I really need to get a book and just jump in. It is hard to know where to start. Court of Thorn and Roses? Throne of Glass? I have decision fatigue! Someone help me!!! Throne of Glass is here because… assassins! But someone save me from the choices!!!

Released: 2018
After serving out a year of hard labor in the salt mines of Endovier for her crimes, 18-year-old assassin Celaena Sardothien is dragged before the Crown Prince. Prince Dorian offers her her freedom on one condition: she must act as his champion in a competition to find a new royal assassin.
Her opponents are men-thieves and assassins and warriors from across the empire, each sponsored by a member of the king’s council. If she beats her opponents in a series of eliminations, she’ll serve the kingdom for three years and then be granted her freedom.
Celaena finds her training sessions with the captain of the guard, Westfall, challenging and exhilarating. But she’s bored stiff by court life. Things get a little more interesting when the prince starts to show interest in her… but it’s the gruff Captain Westfall who seems to understand her best.
Then one of the other contestants turns up dead… quickly followed by another. Can Celaena figure out who the killer is before she becomes a victim? As the young assassin investigates, her search leads her to discover a greater destiny than she could possibly have imagined.

What did you think? What are your favorite books with assassins in them that you have read or are looking forward to reading? What books about would you recommend? Don’t forget to comment below so we can chat!