Get excited!!! Today I get the honor of helping Julie Eshbaugh launch the pre-order campaign and a giveaway for her latest novel, Crown of Oblivion, which is out on November 11th!
To help kick off the pre-order launch and give away, Julie Eshbaugh took time to answer questions for an exclusive interview and provide an excerpt from Crown of Oblivion as well!
All pre-order campaign launch and giveaway information is at the end of the post! 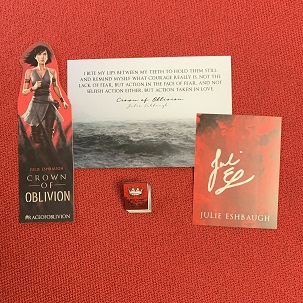 1) Is there something about your writing craft you noticed was your “weakest link” that you can now say is one of your strongest? How did you improve it?
I don’t know if it was my weakest link, but I think since my first book, I’ve improved my use of pacing. I think pace comes down to the author telling the story in a way that makes the reader curious about what will come next. I’d like to think that each of my books has its own strengths, but in terms of pace, this is definitely my strongest book.
3) To play off the above, is there something you believe has gotten better and you can say is very prevalent across the literary world?
One area that I think has gotten better across the YA world is how many strong female characters you see in books–strong in all different ways. Young women are very capable, and it’s exciting to read about girls who don’t let barriers stop them.
4) What books are you most looking forward to reading in the second half of 2019 and (if you know) the beginning of 2020, why?
Yikes, there are so many! Let me start with When She Reigns, the third book in Jodi Meadows’s Fallen Isles series. If you enjoy high fantasy with dragons, this series is for you! Another third book I’m excited for is Queen of Nothing by Holly Black, closing out her Folk of the Air series. And lastly, I’m excited for a picture book! My friend Kat Zhang, who has published both YA and Middle Grade books in the past, has her first picture book coming out this fall–Amy Wu and the Perfect Bao, all about a little girl cooking with her family. 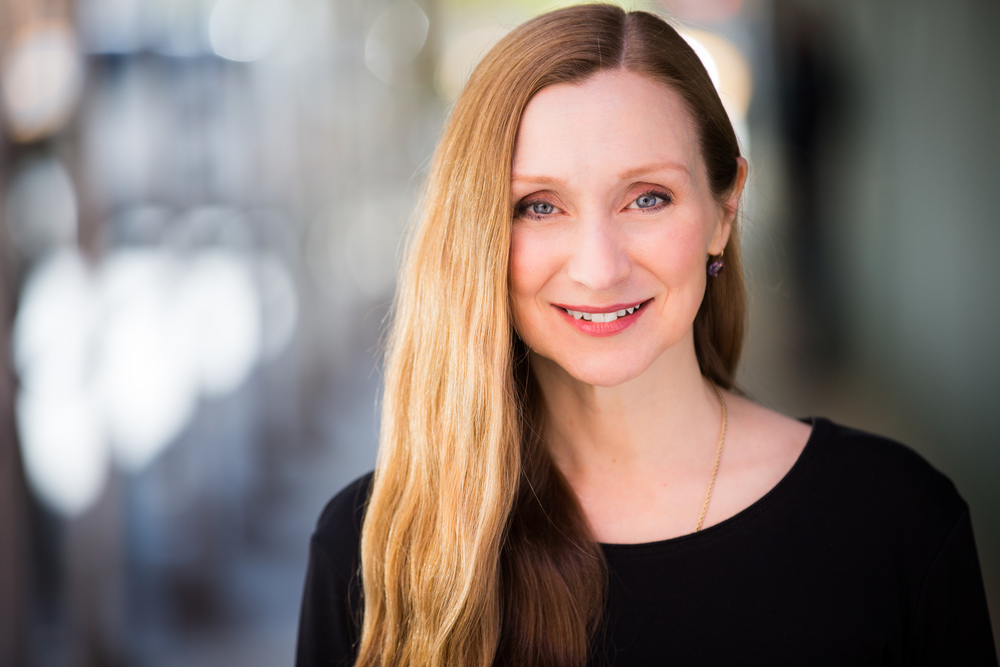 5) You were successful, having won awards, creating online videos (you had gaming but it was videos) for teens. What made you move into writing books and how did that experience (if it did) influence the books you write?
To really explain my experience with the video series, I need to first explain that my creative partner for those videos was my son Dylan, who was thirteen years old at the time. He had grown up with me always shooting and editing, and he appeared in both of the short films I made when he was young. So when he was in middle school, we put our heads together to produce a comedic video series about a middle school boy. It became quite successful, and as you mentioned, got some recognition. Eventually–after 28 episodes–we both outgrew it. He now writes and performs comedy, and I moved onto writing novels. I had ideas for stories I wanted to tell, so I started writing.
6) For those that don’t know about Pub Crawl, can you talk more about it and why it is important for you to be apart of it?
Pub Crawl is short for publishingcrawl.com, which is a group blog I’ve been contributing to since 2010. It’s been great for me, because it introduced me to other aspiring writers. When we started, no one in the group was published, but one of the founding members was Sarah J. Maas! Through Pub Crawl, I’ve had the chance to blog with Amie Kaufman, Susan Dennard, Erin Bowman, Jodi Meadows, Stacey Lee, Stephanie Garber, Eric Smith, and lots more. Since I was one of the last of the early members to get published, I’ve gotten the chance to both learn from writers further down the path, and also serve as an example that if you stick with it, you’ll get there!
7) Your latest book, Crown of Oblivion, is a race for survival, freedom against those that will kill to achieve it, after your memory is wiped out. The setting must be a pretty powerful piece of this story- another character come to life? I would imagine the cast of characters that are in the race are also as important as Astrid herself. Would you agree with those assessments? Explain, please.
I think that’s a good assessment. One word to describe the kingdom of Lanoria would be unforgiving. That would go for the terrain, as well as many of the characters Astrid comes in contact with. Relentless is another word I would use, both to describe the race and the world of Lanoria in general.

Crown of Oblivion is out via HarperTeen on November 11th, 2019

Lightning flashes. For a moment, the nighttime world beyond this dormitory window is as bright as if it were noon. The green hedge that hems in the yard appears, and beyond it, the gray palace wall. Then just as quickly everything’s black again, and I count under my breath.
One . . .
Two . . .
Three . . .
Four . . .
Five . . . Thunder rolls across the roof.
Five. The storm is almost here.
Another flash, but this time, there’s something else out there. Between the hedge and the wall. A boy. I forget to count. It was just a glimpse, but I thought it could be my brother Jayden.
Then the thunder, so close my bones rattle, and then another flash, and the boy is gone. A tree branch scratches at the outside of the glass. Not him, not him, not him, I whisper to myself.
By the time the rain starts, I’m sure it wasn’t Jayden, or anyone else. Something, but not a boy. A deer maybe. It doesn’t matter. The rain is coming down so hard now I can’t see out, even with the lightning, and this game I’m playing with myself is done. The rain roars against the slate roof, loud enough to wake the other girls, so I hurry back to my cot and pull the covers halfway over my face before anyone can catch a glimpse of me in my nightgown.
But being quick is not enough. A few of the girls are already awake. Behind me, Lily whispers something to the girl in the cot beside her. I tell myself she’s talking about something else. But then Dina murmurs under her breath, “Did you see her scars?”
It’s nothing, I tell myself. Let it go. But all I want to do is sit up and scream at them to mind their own business. I don’t need their pity.
“Knock it off, you two.” It’s the voice of Mrs. Whittaker, and now it’s so much worse. I wish she hadn’t heard, but the storm is loud enough to wake most of the twenty girls in the room. I’m sure they’re all listening now. “If Astrid weren’t under that whip, don’t you realize one of you might be? It’s not just the princess she’s sparing, but every one of you.”
No one says a word after that.
Could she be right? I suppose if I weren’t the princess’s surrogate, one of these other girls would be, so maybe what she says is true. Maybe I’m not just suffering in Renya’s place, but in theirs, too. Though I don’t know if I want to think about that. I don’t want to resent all these girls in the same way I already resent Renya.
The siren interrupts my thoughts.
It’s so loud, it drowns out even the rain and wakes any of the girls who were still sleeping. Everyone sits up. Embeds flash in the dark like red fireflies. Whispers pass from cot to cot. Everyone is wondering who the siren is for, who’s been discovered missing. Lightning flashes again, and I remember the boy I thought I’d seen through the window. I pull the sheet off and sit up, and just at that moment a figure appears in the doorway with a light in her hands. The light points down, but even in the dark, the mix of authority and anxiety I feel flowing from her tells me it’s Renya. I wonder how much she heard.
She flips on the overhead light.
“Princess!” cries Mrs. Whittaker, and I can tell she’s wondering, too.
“I’m sorry to disturb you all, Mrs. Whittaker,” Renya says, though it’s clear from her tone she’s not sorry at all. “I need to speak with Astrid right away.” She sounds like a schoolteacher speaking to a roomful of children, but I know her too well. There’s a shiver when she says my name. There’s more than a little fear in her.

For a chance to win everything pictured above, please follow this link to the rafflecopter giveaway set-up until November 10th

*my first rafflecopter, please be patient if I have kinks to workout in the beginning*