Skip to content
This Top 5 series started back in October and I kind of lost motivation for making it every week. But it’s back! This is a series of books that I want to read that all have a common theme. Previously on the blog I have focused on witches, werewolves, thrillers, faeries, fairy tale retellings and high fantasy. I am going to try and bring this series back for every Saturday.

To be honest, I’m not sure I know the difference between a thriller and a psychological thriller so don’t hold me to the “psychological” part of this… I’m just going to go with it.

If anyone has been paying any attention at all I have been mouthing off about The Girl With All the Gifts and M.R. Carey since I started this blog because… reading became a combat sport– and sleep… oh yeah… just when you thought the insomnia couldn’t get worse…

Synopsis you ask? This is all you are getting:
Melanie (Because Carey knows how to land you somewhere between empathy and disgust when it comes to the main character) is a very special girl. Dr Caldwell calls her “our little genius.”

Every morning, Melanie waits in her cell to be collected for class. When they come for her, Sergeant keeps his gun pointing at her while two of his people strap her into the wheelchair.
2. Yeah. It just came out but I think Power applies her gift in the craft of writing fearlessly, let alone the gripping content. AND since I went running down Mr. Carey on twitter to read it… I think it is fitting that it come next….

Wilder Girls (Review) by Rory Power (Q and A with Power)
Synopsis:
It’s been eighteen months since the Raxter School for Girls was put under quarantine. Since the Tox hit and pulled Hetty’s life out from under her.
It started slow. First the teachers died one by one. Then it began to infect the students, turning their bodies strange and foreign. Now, cut off from the rest of the world and left to fend for themselves on their island home, the girls don’t dare wander outside the school’s fence, where the Tox has made the woods wild and dangerous. They wait for the cure they were promised as the Tox seeps into everything.
But when Byatt goes missing, Hetty will do anything to find her, even if it means breaking quarantine and braving the horrors that lie beyond the fence. And when she does, Hetty learns that there’s more to their story, to their life at Raxter, than she could have ever thought true.
3. Just because it is more fantasy than horror and just because it isn’t his lane, doesn’t mean he can’t grab you by your beating heart and not let go. I will stand by the fact that this is Stephen King’s best book till the day I die…

The Eyes of the Dragon by Stephen King
Synopsis:
“It is just not possible to stop turning the pages” (The Washington Post) of this bestselling classic tale—an epic fantasy as only Stephen King could envision it.
“Once, in a kingdom called Delain, there was a king with two sons….”
Thus begins one of the most unique tales that master storyteller Stephen King has ever written—a sprawling fantasy of dark magic and the struggle for absolute power that utterly transforms the destinies of two brothers born into royalty. Through this enthralling masterpiece of mythical adventure, intrigue, and terror, you will thrill to this unforgettable narrative filled with relentless, wicked enchantment, and the most terrible of secrets….
4. HAHAHA! No seriously. I planned to put this book on the list. Anyhow, when I looked it up to grab the cover and synopsis it literally said Strangers: A Psychological Thriller (I had always just known it as Strangers). Well then. BAH! 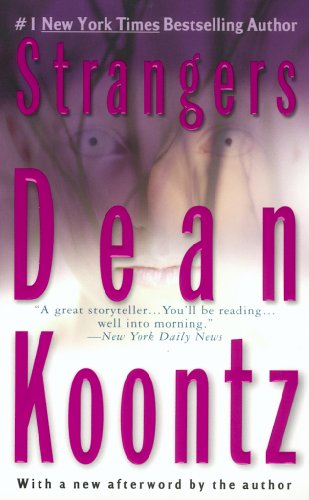 Synopsis:
A writer in California. A doctor in Boston. A motel owner and his employee in Nevada. A priest in Chicago. A robber in New York. A little girl in Las Vegas. They’re a handful of people from across the country, living through eerie variations of the same nightmare.
A dark memory is calling out to them. And soon they will be drawn together, deep in the heart of a sprawling desert, where the terrifying truth awaits…
5. Ok. One I liked it better than the Alienist. Two just because now that the TV show is out, I always feel the need to state I read both books when they first came out. Sadly, they were the last two fiction books I read before grad school came out… I think I read maybe a half dozen fiction books over the next decade. That’s just awful. I know. 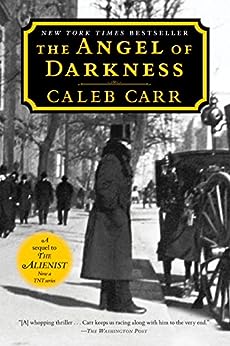 The Angel of Darkness by Caleb Carr

Synopsis:
June 1897. A year has passed since Dr. Laszlo Kreizler, a pioneer in forensic psychiatry, tracked down the brutal serial killer John Beecham with the help of a team of trusted companions and a revolutionary application of the principles of his discipline. Kreizler and his friends—high-living crime reporter John Schuyler Moore; indomitable, derringer-toting Sara Howard; the brilliant (and bickering) detective brothers Marcus and Lucius Isaacson; powerful and compassionate Cyrus Montrose; and Stevie Taggert, the boy Kreizler saved from a life of street crime—have returned to their former pursuits and tried to forget the horror of the Beecham case.
But when the distraught wife of a Spanish diplomat begs Sara’s aid, the team reunites to help find her kidnapped infant daughter. It is a case fraught with danger, since Spain and the United States are on the verge of war. Their investigation leads the team to a shocking suspect: a woman who appears to the world to be a heroic nurse and a loving mother, but who may in reality be a ruthless murderer of children.
Once again, Caleb Carr proves his brilliant ability to re-create the past, both high life and low. Fast-paced and chilling, The Angel of Darkness is a tour de force, a novel of modern evil in old New York.

Ok I’m sticking with the following for one more week: