I came a cross a book tag done  Xee Harlow Reads  – a bookish version of the seven deadly sins. And thought it was BRILLIANT! Immediately wanted in – with a few small modifications.
First. Let’s all remember what the seven deadly sins are so we can knock them off one at a time and have an excuse stare at Brad Pitt <Cue Angels Singing>. Maybe someday I’ll create an Oceans Eleven Tag— OH CRAP WHAT A GREAT IDEA!!!

I’ve modified a couple of how these are these are answered and there aren’t any rules that I could see, other than of course to tag the person who nominated you… but otherwise.. let’s tell Monday we are extending the weekend and being sinful, shall we?

1) WRATH | What author do you have a hate that everyone else lurrrrrves?

Wow. Straight to final Jeopardy, huh? Yeah. Hate is a pretty strong word. I don’t know if I’d say hate but definitely harbor some serious issues with and when you see who I chose… I don’t even think I’ll have to explain myself. So I’ll just get to it.

BECAUSE VAMPIRES DON’T GLISTEN IN THE SUN WOMAN… AMONG OTHER THINGS.

2) GLUTTONY | What book have you devoured over and over again with no shame?

Everyone has to see this one coming. Although now I listen to them over and over again. It is just easier than carrying them around… Hell I fall asleep to them… Kaz and crew are my company. I’m pretty sure they could show up tomorrow and the cats would know them by voice.

3) SLOTH | What book have you neglected to read due to laziness?

This one is easy. I love N.K. Jemisin. I LUUUUUURRRRVE The Fifth Season. So then I went and did something real stupid. I bought this… 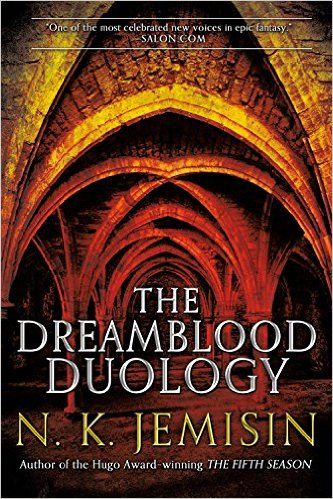 I didn’t just buy each book. NOOOOOOOOOOOOO. I bought the omnibus in ONE BIG BOOK. And now I look at it and shake in my boots. <weeps in sadness>

4) PRIDE | What book do you talk about most in order to sound like an intellectual reader?

There isn’t one specific book here. But I spent fifteen years in education. And most of that time I spent specializing in English Language Arts PK-12th Grade. Damn straight if I don’t bring that up on a regular basis (research, scientific and all). I try not to let it come up in my reviews too much but in conversation and such or heated debates. Yeah. I won’t lie. It comes out.

5) LUST | What attributes do you find attractive in male or female characters?

Well this shouldn’t be too hard to figure out either- the underdog, the misunderstood. Yeah I was one of those idiots that wanted to be the one to fix Eminem. I like them complicated and and multilayered and damaged and interesting but with good buried deep somewhere inside. But I never want them to find a girl because that just ruins it.
As for girls? I don’t want them to get the prince at the end. I want them on their own two feet. I want them in reality, paying for their mistakes. I want them multidimensional, too. I want them damaged, too. Because that’s life. Everyone has their crazy. Some are just better at hiding than others, and I don’t want to see some boy coming along to protect her from others or herself from her crazy.
And I’m sick of seeing everyone with a support system because not everyone has a support system. Write the characters that don’t have a support system and how they cope.
The marginalized (especially those with mental illness and impoverished or dealing with addiction etc…) are often alone in the world, shunned and abandoned (not all but many) and they don’t get the friends and family and support system. Write that story without them finding the connection at the end. Write how they have to struggle everyday, fight the system and make it alone. It is important, it is honest and it needs to be told.

6) ENVY | What book would you most like to receive as a gift?

Honestly? What I want now? Are more hard copy ARCs (especially four I can think of off the bat that are impossibilities– you know them.. say them with me… Ninth House, Queen of Nothing, Toll and Kingdom For a Stage). I’m also begging for ARCs of Court of Lions (sequel to Mirage) and Kiersten White’s new King Arthur book The Guinevere Deception. So if you have any connections out there and are reading this??? I HAVE TWO PERFECTLY FUNCTIONING FUNCTIONING KIDNEYS…  But yeah, more hard copy arcs on the whole? That would be the greatest gift in the world. Because buying actual books is a luxury I can’t afford and if anyone could give me a gift? I’d say help me pay the rent or buy food. And Gomez’s meds just cost me $35 I just didn’t have… but the boys are my kids and you do for your kids.
Ask me this question again in four-six months and I’d have a real answer.
And I am actually going to tag a few because this is too much fun not too BUT AS ALWAYS.. ANYONE CAN FEEL FREE TO JOIN THE FUN!
Becky at Crook Books
The Reading Chemist
Christina Reads at Chriakaru Reads
SPasciuti at Reader Fox
Surbhi at Bemused Bibliophile/Books Untold
Esmee at Ezzies Bookshelf