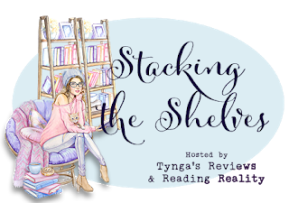 
For this episode of Stacking the Shelves I once again bring you three books that have been on my shelves so long that it makes my eyes twitch to look at them. :/

*Side Note: Apparently this one has been on my shelf so long that it has a second shelf with a different cover. This is the edition and cover on my shelf. If anyone can explain to me how that happened, I’d love to know.

Five months ago, Valerie Leftman’s boyfriend, Nick, opened fire on their school cafeteria. Shot trying to stop him, Valerie inadvertently saved the life of a classmate, but was implicated in the shootings because of the list she helped create. A list of people and things she and Nick hated. The list he used to pick his targets.
Now, after a summer of seclusion, Val is forced to confront her guilt as she returns to school to complete her senior year. Haunted by the memory of the boyfriend she still loves and navigating rocky relationships with her family, former friends, and the girl whose life she saved, Val must come to grips with her role in the tragedy that took place, in order to make amends and move on with her life.
Jennifer Brown’s critically acclaimed novel now includes the bonus novella Say Something, another arresting Hate List story.

Second Book Up : Isle of Blood and Stone (Tower of Winds Book 1) by Makiia Lucier

Genre: Fantasy
Synopsis:
Eighteen years ago, two princes vanished. Now a riddle hidden on a mysterious map could chart a course towards the truth and the missing royals in this historical fantasy that’s perfect for fans of Rachel Hartman and Tamora Pierce.
Eighteen years ago two princes of the island kingdom of St. John del Mar were kidnapped and murdered, a deadly plot by the rival kingdom of Mondrago. Everyone knows the story, but for Elias, Mercedes, and Ulises, the aftermath of that tragic day is deeply personal.
Elias grew up without his father, who was killed trying to protect the princes. Mercedes is half-Mondragan, leaving her to grow up in the shadow of del Mar’s hate. And Ulises, as the youngest and only remaining prince, inherited the throne meant for his older brothers.
Now, the three friends just want to move on with their lives. But when two maps surface—each with the same hidden riddle—troubling questions arise. What really happened to the young princes? And why do the maps look like they were drawn by Elias’s father, whose body was never found?
To discover what really happened that fateful day, Elias, Mercedes, and Ulises must follow the clues hidden in the maps, uncovering long-held secrets and unimaginable betrayals along the way. But the truth is dangerous, and not everyone wants it to come out.
Isle of Blood and Stone is a sweeping fantasy full of intrigue and schemes, romance and friendship, and fearless explorers searching for the truth.

I know, I know

Synopsis: In Jesmyn Ward’s first novel since her National Book Award–winning Salvage the Bones, this singular American writer brings the archetypal road novel into rural twenty-first-century America. An intimate portrait of a family and an epic tale of hope and struggle, Sing, Unburied, Sing journeys through Mississippi’s past and present, examining the ugly truths at the heart of the American story and the power—and limitations—of family bonds.
Jojo is thirteen years old and trying to understand what it means to be a man. He doesn’t lack in fathers to study, chief among them his Black grandfather, Pop. But there are other men who complicate his understanding: his absent White father, Michael, who is being released from prison; his absent White grandfather, Big Joseph, who won’t acknowledge his existence; and the memories of his dead uncle, Given, who died as a teenager.
His mother, Leonie, is an inconsistent presence in his and his toddler sister’s lives. She is an imperfect mother in constant conflict with herself and those around her. She is Black and her children’s father is White. She wants to be a better mother but can’t put her children above her own needs, especially her drug use. Simultaneously tormented and comforted by visions of her dead brother, which only come to her when she’s high, Leonie is embattled in ways that reflect the brutal reality of her circumstances.
When the children’s father is released from prison, Leonie packs her kids and a friend into her car and drives north to the heart of Mississippi and Parchman Farm, the State Penitentiary. At Parchman, there is another thirteen-year-old boy, the ghost of a dead inmate who carries all of the ugly history of the South with him in his wandering. He too has something to teach Jojo about fathers and sons, about legacies, about violence, about love.
Rich with Ward’s distinctive, lyrical language, Sing, Unburied, Sing is a majestic new work and an unforgettable family story.

What is on your shelves??! Questions about my shelves or the boys – lord knows they love the attention! Ask away!!